Cancer vaccine: Is it possible?

A corresponding member of the Russian Academy of Medical Sciences, Doctor of Biological Sciences, Head of the Department tells the correspondent of the journal about the achievements and prospects of vaccination against cervical cancer. department of transforming tumor genes Fedor Lvovich Kiselyov.

The papilloma virus (HPV, Human papilloma virus) accounts for about 10% of all cancer cases. Cervical cancer plays a leading role in papillomavirus oncological diseases. In women, this form of cancer is the second most common after breast cancer; as a rule, it affects young women (from 22 to 44 years old), the average "loss of life" at the same time is 26 years. The bulk of the incidence of cervical cancer is in poor countries. In developed countries, systematic gynecological examinations and cytological smear tests have led to the fact that the late stages of cervical cancer are practically absent there. Unfortunately, in Russia, due to the lack of constant monitoring of women's health and the unavailability of many methods, up to 40% of cases of cervical cancer are advanced late stages that are difficult to treat. 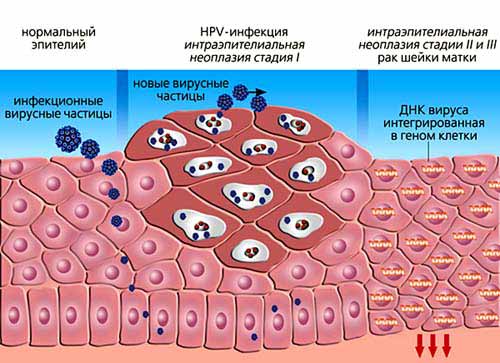 There are more than 100 types of papillomaviruses, most of them cause benign skin growths (warts), but some initiate malignant degeneration of mucosal epithelial cells. The role of papillomavirus infection was proved with the advent of viral DNA diagnostics, which allowed us to prove that almost all cancerous and precancerous lesions of the cervix have viral DNA present in the altered cells. In the mid-1980s, studies by a group led by Harald zur Hausen showed that two types of HPV (16 and 18) are detected in cervical cancers, while in benign lesions (condylomas), another type of HPV is mainly present (6 and 11). Later, evidence of the role of the virus in the development of cervical cancer was confirmed in numerous studies, and the list of "high" risk viruses was replenished (type 31, 45 and others). In 2008, Harald zur Hausen received the Nobel Prize for his discovery.

In the presence of HPV, additional factors for the development of subsequent cervical cancer are both weak cellular immunity and prolonged stay of the virus, as well as hormonal effects on the body (abortion, hormonal contraceptives), smoking, frequent change of partners, as well as individual genetic characteristics.

Currently, this infection is observed in about 30-40% of women 3-4 months after the onset of sexual activity. Often it can be transient, i.e. the infection appears, but if a woman has good immunity, then these cells disappear from the body, and with repeated contact with the HPV carrier appear again. At some stage, it reaches a critical value and the process of rebirth begins. Today, the problem is that, in theory, boys need to be vaccinated, because they are the carriers of this virus. But there is no screening of young people infected with HPV in any country in the world.

Gardasil was released to the world market in the summer of 2006 . A similar drug cervarix, developed by GlaxoSmithKline, appeared at the end of 2006. However, cervarix acts only against HPV type 16 and 18, while gardasil is quadrivalent, i.e. it affects four types of virus: 6, 11, 16 and 18. In addition, since there are still high-risk virus types, for example 31, 33 it has now been shown that the vaccine gives a cross-immune response with viruses of type 31 and 33, so in all likelihood gardasil will act against these viruses as well. However, this cannot be said for sure, because if the percentage of tumors caused by type 16 and type 18 viruses ranges between 80 and 90%, then patients with type 31 and 33 HPV are about 2-3%, therefore, it is statistically difficult to recruit such patients and give an accurate assessment. It is worth emphasizing that the main purpose of this vaccine is preventive, not therapeutic. Gardasil is intended for virgins and young women who are not infected with HPV. For infected and patients with cervical cancer, it is ineffective.

The vaccine is based on the synthesis of viral capsid proteins capable of self-assembly and the formation of virus-like particles. These particles are identical in their immunological properties to the native virus, but do not contain DNA, therefore they do not cause disease. When vaccinated with gardasil, antibodies are produced that can neutralize the virus and prevent the spread of infection. It is worth emphasizing that the fundamental difference of this vaccine is that there is no genetic material of the virus in it, only a protein component is present.

It is really important that for the first time it became possible to prevent the disease with at least one type of cancer. For other species, this method is unsuitable, since only cervical cancer is induced in the epithelium. However, there are types of cancer that occur due to other viruses, such as the hepatitis B virus, and a corresponding vaccine has appeared. There is also even evidence that, apparently, vaccination against hepatitis B will prevent liver cancer. But there are no serious epidemiological data, because, firstly, liver cancer is less common than other types of cancer, and secondly, the latency period for this type between the time of infection and the tumor is about 30-40 years.

Today, many articles have appeared "exposing" gardasil, the authors of which refer to data showing a 50% increase in the probability of cervical cancer during vaccination with gardasil. We do not know anything about this, except that gardasil testing was carried out on 30 thousand virgins who do not have HPV, and during the five-year study, no side effects and no HPV infection were detected as the girls entered sexual life. Surprisingly, the vaccine has no side effects, although it is a protein drug, and protein can be an allergen.

It was too early to apply the vaccine everywhere, since the main difference between cervical cancer is a short period of manifestation of precancerous lesions (they appear within five years). In this case, no such lesions were observed, which is why this vaccine is so effective. Moreover, the girls who participated in the study also do not have concomitant and preceding cervical cancer diseases, such as, for example, erosion. Therefore, it is so important to talk about the use of gardasil today. Texas even introduced mandatory vaccination of 11-12-year-old girls. Currently, the main work in the scientific world is aimed at creating a therapeutic vaccine for women, and in our country work is underway to reduce the cost of gardasil so that it can be available to everyone.