Adding melanin to the vaccine cured mice of melanoma

A new experimental vaccine based on the skin pigment melanin has strengthened the body's immune response to tumors and increased the survival rate of experimental mice with melanoma and breast cancer. In particular, 87 percent of mice with melanoma went into complete remission. Biologists from North Carolina State University, who conducted the experiment, believe that their vaccine is a promising basis for subsequent clinical trials. The study is published in Science Immunology (Ghassemi and Carreno, Heating up cancer vaccines).

Modern vaccines being developed against oncological diseases are aimed at "training" the immune system so that it can recognize tumors and fight them. Many of them, however, do not have a long-term and reliable effect. To improve the technique, scientists used special intradermal microneedles to inject lysate (solution) of skin tumor B16F10 and melanin into the body and heated the inoculation zone by laser irradiation with a spectrum close to infrared (808 nm). 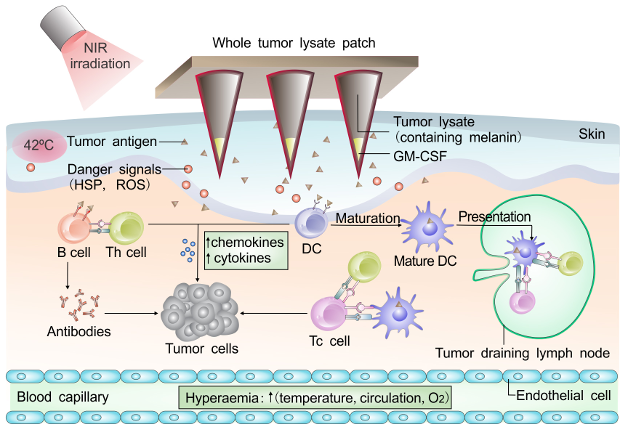 Melanin is a skin pigment that is able to convert 99.9 percent of the absorbed sunlight into heat. The content of melanin significantly affects the risk of skin cancer (melanoma).

In vitro, it has been shown that the vaccine causes the activation of dendritic cells, which are necessary for the presentation of tumor antigens for subsequent recognition by the immune system. Scientists emphasize that it was the combination of light and melanin that turned out to be the key, since melanin converted light energy into heat and heated the vaccine injection zone, enhancing its effect. In the absence of irradiation in an in vivo experiment, it was shown that 16 percent of mice had a decreased tumor growth rate, but their survival rates did not improve. At the same time, the introduction of melanin with irradiation caused the disappearance of tumors in 87 percent of mice, and these animals lived significantly longer than the control groups.

Tumors of control group mice (columns 1-3), mice that received the vaccine without radiation (4-6) and with radiation (7-9). Vertically – the days of the experiment.

In general, the introduction of the vaccine had an effect on a number of immune cells, stimulated dendritic cells, improved the "memory" of T cells and enhanced the synthesis of cytokines. This reduced the growth rate of tumors, in some cases completely removing them, and also reduced metastasis. The vaccine, among other things, successfully affected tumors that were far from the inoculation zone.

To make sure that the vaccine would be effective for other types of tumors besides B16, the scientists repeated the experiment in vivo with BRAF V600E-mutated BP melanoma and 4T1 (triple-negative) breast carcinoma. Complete remission was achieved in 87 and 37 percent of cases, respectively. At the same time, the mice tolerated the treatment well and did not lose weight.

Scientists believe that the combination of such a technique with well-known checkpoint inhibitors (antibodies and other drugs that reduce the ability of cancer cells to resist immunity) can form the basis for the development of new drugs against melanoma and other types of tumors.