Herpes virus-based cancer therapy has been approved for use

Margarita Paimakova, Vesti
On October 27, 2015, in the USA, the genetically modified herpes virus Talimogene laherparepvec (T-VEC) was approved for the treatment of the last stages of melanoma, a deadly skin cancer (FDA Approves IMLYGIC™ (Talimogene Laherparepvec) As The First Oncolytic Viral Therapy In The US – VM). Four days earlier, the relevant regulatory authorities proposed to approve a similar type of treatment in Europe.
Many viruses are known to infect cancer cells. Malignant neoplasms can suppress the normal antiviral response, and sometimes lead to mutations that, by controlling tumor growth, make cells more susceptible to infections. That is, a viral infection can hit a tumor and destroy it, leaving healthy cells close to it intact.
In fact, the strategy of physicians is based on a phenomenon discovered more than a century ago. Back in 1800, doctors noted that patients with cancer after undergoing viral infections suddenly went into remission. In the middle of the last century, researchers armed with this information began a painstaking study of the nature of this phenomenon, as well as experiments on animals. However, sometimes the therapy destroyed the tumor, and sometimes it killed the sick subject.
Unlike the viruses used in those experiments, those that are being studied by scientists today are painstakingly developed creations of genetic engineering. For example, T-VEC is not capable of causing herpes. In addition, the researchers inserted into the virus a gene encoding a protein that stimulates the immune system, which makes the virus even more effective in the fight against cancer. 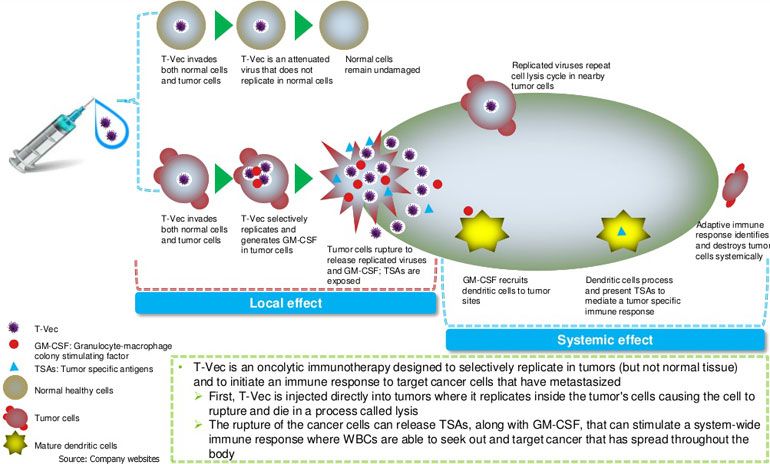 Mechanism of action of T-VEC – VM
More and more studies are entering the clinical stage, and the results are inspiring: for example, a patient with myeloma was cured thanks to the measles virus, although even double stem cell transplantation and other traditional methods of treatment did not help her earlier. By that time, the tumor on the left side of the forehead had almost destroyed the bone and was putting pressure on the brain.
In 2005, an oncolytic adenovirus called H101 was approved for use in China for the treatment of head and neck cancer: tests have shown that the therapy is able to reduce the tumor. At that time, many patients who could not receive treatment at home rushed to China.
Then, in May 2015, promising results of large clinical trials of T-VEC were published. The virus reduced the size of tumors in people with melanoma and increased patient survival by an average of 4.4 months. Therapy based on the introduction of the virus directly into the tumor helped to curb cancer in other parts of the body: this indicates that the virus is really able to provoke an immune response.
Oncologists believe that the combination of T-VEC treatment with cancer immunotherapy may be particularly effective.
Now scientists continue to look for ways to increase the effectiveness of T-VEC. In particular, they would like to develop methods for the systemic delivery of viruses, since the infection may target a tumor that has affected organs that cannot be reached by injection.
It is quite possible that in the future scientists will be able to use viruses to treat a wide range of different types of cancer, because each virus interacts with the immune system in its own way.
Dozens of clinical trials of other similar oncolytic viruses (oncolytic virus) are currently being conducted. The researchers hope that this step by the United States will contribute to an increase in enthusiasm in the scientific community and scientists will work more on this issue. Also, the approval of the official authorities should contribute to an increase in funding for the further development of this approach.
Portal "Eternal youth" http://vechnayamolodost.ru
02.11.2015
Found a typo? Select it and press ctrl + enter Print version