Leukocytes were given weapons to fight metastases

According to Professor Michael King, the head of a study conducted by Cornell University scientists, in about 90% of cases, cancer patients die not from the primary tumor, but from its metastases. He believes that his group has managed to develop an approach that leaves no chance for metastases.

Metastasis is the process of spreading malignant cells that break away from the tumor throughout the body. Surgical removal and radiotherapy are effective against primary tumors, but the difficulty of detecting metastases makes getting rid of them a very difficult task.

The approach proposed by the authors implies the use of nanoliposomes carrying two proteins on their surface: E-selectin (adhesive protein) and TRAIL (from the English Tumor Necrosis Factor Related Apoptosis-Inducing Ligand – related to tumor necrosis factor apoptosis-inducing ligand). The first of these proteins is designed to attach to the surface of leukocytes and malignant cells, and the second is designed to trigger the mechanism of apoptosis (programmed death) of malignant cells. 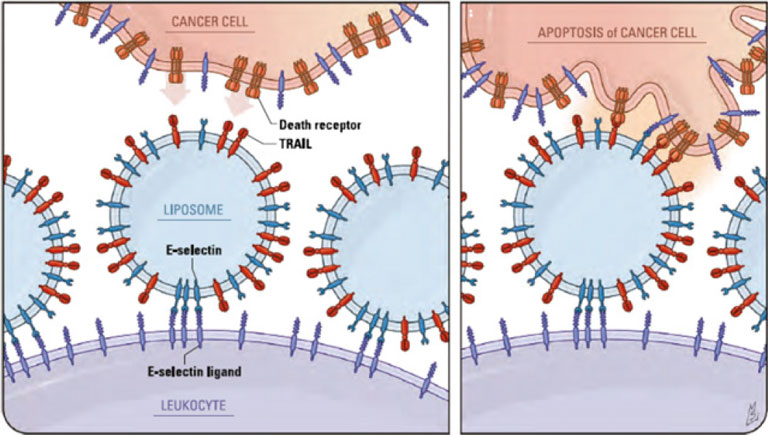 Diagram from an article in PNAS

To test the effectiveness of the developed concept, the researchers added E-selectin and TRAIL liposomes to a saline solution containing malignant cells. In the absence of leukocytes acting as carriers of adhesive and killer proteins, even when recreating blood flow conditions, only 60% of cancer cells were destroyed. The addition of therapeutic liposomes to the system recreating the conditions of blood flow, filled with human blood, increased the efficiency of the destruction of malignant cells to almost 100%.

According to the authors, the mechanism of action of the method developed by them is quite unusual, since the use of leukocytes as carriers of liposomes containing therapeutic proteins turned out to be much more effective than attempts to deliver such proteins to cancer cells directly using liposomes and other molecular systems.

Article by Mitchell et al. TRAIL-Coated Leukocytes that Kill Cancer Cells in the Circulation is published in the journal Proceedings of the National Academy of Sciences.