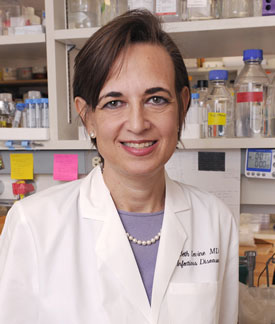 Researchers at the Southwestern Medical Center, part of the University of Texas, working under the guidance of Professor Beth Levine (pictured from the website utsouthwestern.edu ), synthesized a peptide on the basis of which agents can be created for the treatment of various infectious diseases, neurodegenerative diseases and cancer. The mechanism of action of this universal pharmacological agent is based on the induction of autophagy.

Autophagy is a fundamental process of processing damaged or unnecessary components of the cell, consisting in their enzymatic cleavage into separate "building blocks" used by the cell for the synthesis of new structures. This mechanism is extremely important both for maintaining the normal functioning of the cell and for its resistance to various diseases.

Violation of the autophagy process is involved in the aging process, as well as in the development of a wide range of diseases of various natures, including malignant, neurodegenerative (such as Parkinson's disease and Alzheimer's disease), as well as infectious diseases.

The administration of the peptide synthesized by the authors, called Tat-beclin-1 (Tat-beclin 1), to mice ensures their resistance to a number of infectious diseases, including West Nile virus and another mosquito–borne virus, chikungunya, common in Asia, Africa and India. Additional experiments have demonstrated that human cells treated with the tat-beclin-1 peptide are resistant to HIV.

The developers have already applied for a patent describing the process of synthesis of the peptide tat-beklin-1, which is a derivative of the sequence of amino acids beklin-1 – one of the first known mammalian proteins responsible for autophagy. This role of beklin-1 was previously discovered by specialists working under the guidance of Professor Levin, who subsequently demonstrated that defects in this protein contribute to the development of a wide range of diseases. They also showed that the full-fledged activity of beclin-1 and the autophagy mechanism are extremely important for preventing the development of breast, lung and ovarian cancers, effectively fighting viral and bacterial infections, as well as protecting the body from neurodegenerative diseases and premature aging.

Article by Sanae Shoji-Kawata et al. Identification of a candidate therapeutic autophagy-inducing peptide is published in the journal Nature.