Analyze the genes of each tumor

Yulia Smirnova, "Science and Life"The diagnosis of gene mutations in tumor samples will help to choose drugs for the treatment of a number of oncological diseases.

Cancer treatment is one of the most important issues facing world science and healthcare. Every year, more than 12 million new cases of cancer are diagnosed in the world and about 7.6 million people die from cancer. In Russia, 522,410 new cases of the disease were diagnosed in 2011. The most common types of malignant neoplasms in our country: lung cancer, breast cancer, colon cancer and prostate cancer. Lung cancer, stomach cancer and breast cancer are the leaders in terms of cancer mortality in the Russian Federation. Along with classical methods of cancer treatment, such as surgery, radiation and chemotherapy, targeted therapy is also gaining popularity (from the English word "target" – goal). The point is not to affect the affected organ or even the tumor itself, but precisely those proteins that cause the growth of cancer cells.

On February 12, a cooperation agreement was signed in St. Petersburg between the N.N.Petrov Research Institute of Oncology, the oldest cancer research center in Russia, and the AstraZeneca biopharmaceutical company. The result of the joint work will be a project for the diagnosis of gene mutations in tumor samples, with the help of which it will be possible to more accurately select drugs for the treatment of a number of oncological diseases. 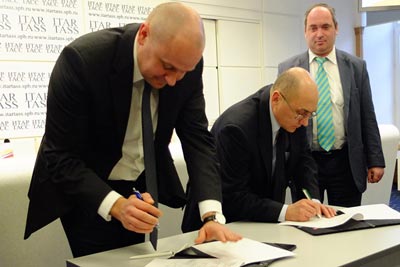 On the part of AstraZeneca, the agreement is signed by the head of the Russian representative office, Nenad Pavletic,
on the part of the N.N. Petrov Research Institute of Oncology, the director of the Institute is Professor Alexey Belyaev (photo by the author).

This is the second major project between the company and scientific organizations in Russia. At the end of last year, work began on the creation of the first biobank in our country, which will become the foundation of all domestic personalized medicine, and for oncological diseases this is currently one of the most promising areas.

According to the director of the Research Institute of Oncology, Professor Alexey Belyaev, for 85 years the institute has accumulated a huge "tissue bank", which will serve as the basis for the project. More than a million tumor samples obtained from 270 thousand patients (this is the largest collection of tumors in Europe) who passed through the clinic of the Research Institute of Oncology will form the basis of future work. Its main goal is to individualize treatment approaches, since the disease proceeds differently in different patients. The same applies to anti-cancer drugs: according to statistics, out of 10 drugs, only one "hits the target". Therefore, the study of gene mutations in oncological samples of patients will allow an objective assessment of the effectiveness of future treatment.

As noted by Professor Evgeny Naumovich Imyanitov, head of the Department of Tumor Growth Biology of the Research Institute of Oncology, the meaning of the project is in the correct selection of therapy for cancer patients. Now there are about a hundred drugs in the arsenal of doctors that allow in some cases to treat cancer quite effectively. But when a particular patient comes to the doctor, it is impossible to predict which drug out of a hundred is suitable for his treatment. This applies not only to oncological diseases, and this is the whole point of personalized medicine – the selection of drugs that are suitable for each specific case.

The idea that underlies the project, as it sometimes happens in science, was born by chance. In 2004, AstraZeneca launched the drug Iressa, intended for the treatment of non-small cell lung cancer (NSCLC). The most common form of this disease in 50% of patients is not subject to surgical intervention, and standard chemotherapy based on platinum preparations only slightly prolongs the life of patients. It turned out that in 90% of cases, patients did not respond to therapy, but the remaining 10% had a colossal effect. Here, it was not the medicine that was examined, but those patients who reacted to the drug much better than expected. It turned out that they have a mutation of the EGFR gene.

The epidermal growth factor receptor (EGFR) is a protein on the cell surface that the epidermal growth factor (EGF) is associated with. When EGF combines with EGFR, it activates the enzyme tyrosine kinase, triggering a chain of intracellular reactions that ensure cell growth and division. Mutations may occur in the EGFR gene, leading to permanent activation of EGFR, which in turn causes permanent activation of tyrosine kinase and, as a consequence, cell growth. EGFR gene mutation is detected in approximately 10-15% of patients diagnosed with NSCLC in Europe and 30-35% in Asia. The mechanism of action of the drug consists in the competitive suppression of the tyrosine kinase receptor of epidermal growth factor (EGFR), as a result of which intracellular signal transmission is blocked, ensuring the survival and growth of tumor cells.

Immediately after this discovery, the Research Institute of Oncology was the first in Russia, completely independently, to use a test based on this mutation in clinical practice. According to Vitaly Prutsky, head of R&D Information Support at AstraZeneca Russia, the same thing will happen with the new mutations found – they will be immediately introduced into clinical practice. So exclusively fundamental research in molecular oncology will gain practical significance. It is important to note that the project is aimed at finding targets for existing drugs. Besides lung cancer, there are already results for thyroid cancer.

The collection of tissues of the Oncologists Research Institute will allow us to study 28 of the most common types of malignant tumors and find mutations that will allow us to target proteins that cause the growth of malignant formations. It is especially worth noting that since representatives of different races and nationalities are characterized by different sets of mutations, first of all, Russian patients will benefit from the work that is already beginning now. But, of course, the results obtained will be used all over the world. "Our study will allow us to objectively assess the possibilities of effective use of drugs in Russia and, at the same time, the data obtained can be used to develop approaches to the treatment of patients not only in Russia, but also in the world," Prutsky said.

The project is designed for about 2.5 years. The volume of investments of AstraZeneca in the study will amount to about 500 thousand dollars.