American scientists have developed a new method for obtaining stem cells, which involves the transformation of a somatic cell into a stem cell using adenoviruses. Specially prepared adenoviruses bring the necessary set of embryonic genes into the somatic cell, which trigger the process of cell rejuvenation. Unlike the previous ones, the new technology does not change the genome of the original cell and does not cause the appearance of tumors.

In the field of stem cell research, serious efforts of scientists are aimed at finding effective technologies for reprogramming somatic cells into pluripotent, that is, capable of various specializations. Over the past two to three years, genes that work in stem cells and determine the expression of the genome at the earliest stages of embryo development have been identified. These are the genes of transcription factors Oct4, Sox2, Klf4, c-Myc and Nanog, and some others. If you introduce them into a somatic cell, for example into a fibroblast, then the cell is reborn and acquires the properties of pluripotency. How can these genes be delivered to the cell, and not just delivered, but also made to work there?

Viral and liposomal gene transfer is now being used. Liposomes with "pluripotency" genes enclosed inside are introduced into the cell, but the efficiency of embedding and activating transgenic material is extremely low. It is more efficient to use a viral carrier or a viral vector (see diagram).

The scheme of gene delivery to the cell by the viral vector method (explanations in the text).
Fig. from the website moikompas.ru .Neutralized RNA viruses (retroviruses) containing the required genes together with the revertase genes and some others (in diagram — 1) are sent to the cell.

After the cell recognizes the viral envelope with the help of receptors (2), the virus introduces RNA into the cell (3). In the cell, RNA is rewritten into DNA by reverse transcriptase (4) and penetrates into the nucleus of the somatic cell (5). There, synthesized foreign DNA carrying the necessary genes and some viral genes is embedded in the DNA of the cell itself (6). After that, everything goes on as usual: during division, the cell synthesizes copies of the updated genome, synthesizes mRNA (7), the necessary therapeutic proteins (8), for which this complex procedure was started. Virus RNAs dress up as a viral envelope and exit the cell, infecting new generations of cells (10).

If the insertion of foreign DNA occurred in a safe place, then the somatic cell "grows younger", is reborn into a stem cell, or, more precisely, the process of induction of pluripotent cells occurs. However, often the genes of the introduced transcription factors are inserted unsuccessfully, and then the somatic cell turns into a tumor cell. In addition, this technology is in principle only suitable for actively dividing cells. An adenoviral vector is used to introduce the gene material into a non-dividing cell. 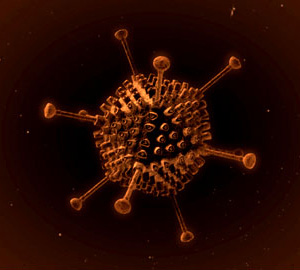 The adenovirus vector is a virion with double—stranded DNA, well known to us from annoying colds. Adenoviruses are not able to integrate into the genome of the host cell, so the expression of the embedded genes is only temporary.

The latter property obviously limits the use of adenovirus vectors for therapeutic purposes, since only a temporary therapeutic effect is achieved, but for the time-limited process of converting a somatic cell into a stem cell, this method is the best fit. It is only important to start the induction process here.

Despite the well-known theoretical feasibility of this technology, its practical implementation is documented only now. This technology was developed by a group of specialists from several medical research centers in Massachusetts (USA) under the leadership of Konrad Hochedlinger from the Harvard Stem Cell Institute. Attempts have been made before, but they have not been successful. The failure was explained, apparently, by the rapid dissolution of adenoviruses in somatic cells.

This time, the researchers applied a new technique developed by the group recently. It uses a line of mice with the Oct4 gene, the transcription of which is activated by the antibiotic doxycycline. Therefore, in the first series of experiments, scientists experimented with cells of this particular line of mice. Mouse embryonic liver cells, fibroblasts and adult hepatocytes were selected as "experimental" somatic cells; the cells were treated with doxycycline in parallel with viral infection. As a result, the expression of the Oct4 gene began, which triggered a cascade of reactions. The experiment lasted about a month. During this time, all cell types showed the ability to reprogram, giving several colonies of induced pluripotent cells. In these colonies, their own, no longer viral embryonic genes were synthesized.

Expression of own (endogenous) embryonic genes in colonies obtained as a result of the experience of induced pluripotent stem (iPS) cells of embryonic liver (FL), fibroblasts (TTF), adult hepatocytes (HEP). For comparison, the level of expression of these genes in embryonic stem cells (ES) is shown. As we can see, the level of expression of these transcription factors is approximately the same in all cases. Fig. from the discussed article in Science.It was important to show that adenovirus cell degeneration is also possible in the lines of normal mice, without the doxycycline-dependent Oct4 allele.

Such an experiment was performed on adult hepatocyte cells. These cells are more susceptible to infection with adenovirus than others. After a month of incubation, colonies of cells were isolated in which the required embryonic genes worked normally. The transformation of adult hepatocytes into stem cells occurred due to the demethylation of the necessary embryonic genes. In mature somatic cells, embryonic genes, on the contrary, are hypermethylated and therefore do not work.

Scientists note a very low efficiency of adenovirus reprogramming of cells: with retroviral transfer 0.01–0.1%, and with adenovirus — 0.0001–0.001%. But this method has several important advantages. The first of them is that in no case did tumor formations appear, and with retroviral transfer, cells very often generate tumors. Secondly, the genome of the resulting pluripotent cell has no viral inserts and is therefore identical to the genome of the embryonic cell; this makes it possible to fully compare the work of both genomes. Both advantages suggest ample opportunities for future therapeutic developments. Therefore, in the last lines of their message, the authors expressed the hope that this work will continue, but with the use of human somatic cells.