Artificial astrocytes have been created

Brain Stars in a Petri dish
Sofia Neskuchnaya, "Newspaper.Ru»Scientists have created artificial astrocytes – the most common brain cells that not only provide the basic functions of nerve cells – neurons – but also hold the key to the study of many diseases, from headaches to dementia.

Astrocytes were obtained from embryonic and induced pluripotent stem cells. 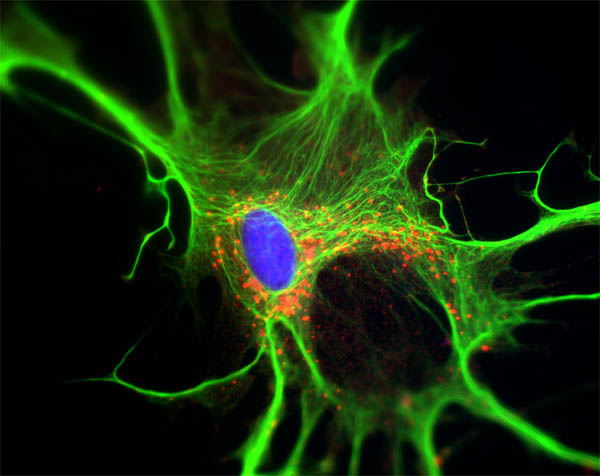 Astrocytes are star–shaped cells that make up most of the brain volume. Traditionally, scientists have considered them a buffer – the "cement" or "glue" of brain matter – but their research has shown that they are carriers of the most important functions. Among them are the formation of the blood–brain barrier – a semi-permeable border between the circulatory system and nerve cells, protecting the brain from the penetration of harmful substances from the blood; and ensuring homeostasis - the reuptake of excess potassium ions and neurotransmitters. Accordingly, astrocytes are involved in the development of a number of disorders of the central nervous system.

Scientists from the University of Wisconsin-Madison managed to grow astrocytes in a test tube from human stem cells. Their work (Krencik et al., Specification of transplantable astrogial subtypes from human pluripotent stem cells) is published by Nature Biotechnology.

Biotechnologists managed to obtain astrocytes in a Petri dish first from embryonic stem cells, and then from artificially obtained stem cells with induced pluripotency (cells of the second type are considered more promising both for practical and ethical reasons, since they are obtained without the use of human embryo tissue).

The ability to produce large homogeneous samples of astrocytes opens up the prospect for a better study of their functions, as well as for the development of new effective drugs for nervous diseases, says Professor Sung Chong Zhang, in whose laboratory the work was carried out.

"In part, the small study of astrocytes is explained by the difficulty of obtaining them. Now we can grow billions or trillions of such cells from a single stem cell," Zhang said.

Although brain science has traditionally been concerned with neurons–large cells that process and transmit information–researchers have recently been paying more and more attention to studying the role of other brain cells in its function. There are several types of astrocytes; their functions are extremely diverse and need to be studied in detail.

Some scientists suggest that astrocytes determine human intelligence: the volume that these cells occupy in the brain of homo sapiens significantly exceeds their volume in the brain of any other animal.

"Without astrocytes, neurons cannot work. Astrocytes surround the nerve tissue, protecting it and maintaining a healthy regime for it. They are involved in the performance of almost every function of the brain, as well as in any disorder," Zhang said.

In addition to the function of a "pilot plant" for drug testing, astrocytes (in the distant future) will be able to become the object of transplantation for patients with brain injuries, Parkinson's disease and spinal cord injuries.

The technology developed by Zhang's group makes it possible to obtain astrocytes of any required type. In addition, by genetically modifying them, it is possible to obtain a model of diseased tissue. So it will be possible to study complex neurological diseases in laboratories, objects for which were previously unavailable.