Artificial organs: the future is behind three–dimensional printing

Print me a kidney

Nadezhda Markina, "Science and Life"Just yesterday, it belonged to the realm of science fiction. 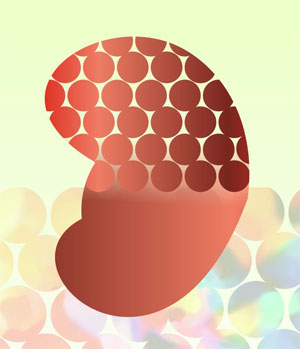 Today, the latest technology of 3D bioprinting, or three-dimensional printing of organs, is beginning to develop in Russia.

The idea of regenerative medicine is to restore damaged tissues and organs "from the inside". A universal tool is stem cells with unique potentials for development. The technologies are different. Specialists have already achieved great success in cell transplantation and tissue engineering, they have learned how to grow some organs in bioreactors using cells and a special frame. Another idea is not to grow, but to assemble an organ from cells, like a three–dimensional "puzzle". This can be done by... printing on the printer. Of course, not on a regular one, but on a bioprinter.

The heads of 3D Bioprinting Solutions company told about this technology at the International scientific conference "Regenerative medicine in Russia" in Skolkovo. "We pour cells into the printer instead of ink and, in accordance with a computer model on a special substrate, we get a print in 2D format. By printing layer by layer, we create an organ in 3D format," explained the idea of three-dimensional bioprinting (also known as biofacturing) Professor at the University of Virginia, scientific director of 3D Bioprinting Solutions Vladimir Mironov.

The unit of printing in a bioprinter is not individual cells, but spheroids – conglomerates of cells in the form of balls placed in a hydrogel. But in order to print, spheroids must first be made, and this is a separate task that has already been solved. Robotic devices produce such spheroids by dripping a suspension of cells into microlunks. They are arranged in different ways and their performance is also different. The record is 10 thousand spheroids per second. In order to print an organ, you need a "blueprint", or "bluprint", in general, a computer design. An organ is a complex structure consisting of different tissues, penetrated by a network of blood vessels. To do a computer reconstruction of the kidney or liver is the next stage.

The process of bioprinting itself, in fact, almost does not differ from the technology of 3D printing of inanimate objects, which has been rapidly developing recently. Experts are talking about the third technological revolution based on 3D printing. You can print any object – you can print a machine, or you can print a three-dimensional organ. The "ink" in the bioprinter is spheroids. Different fabrics are built from different spheroids – each has its own hole in the cartridge. According to computer design, the printer "draws" one layer of the organ on the substrate. Then another, and so, layer by layer, the organ mass grows. At the same time, the spheroids do not remain separate elements – they merge. Vladimir Mironov and his colleagues have shown this in experiments. And the hollow spheroids inside merge to form a common cavity. Biologists with their help were able to print blood vessels, and not simple, but an extensive vascular network. This is already a reality.

Scientists have also developed a magnetic printing technology in which spheroids are directed to the right place by a magnetic field in solenoids. However, the printing of the organ mass is not everything, the organ needs to be "finished" in a bioreactor, – explains Vladimir Mironov.

Bioprinting is an alternative to "frame" medicine, when a solid frame of an organ is used, which is seeded with cells, as Paolo Macchiarini, a world-famous surgeon, a specialist in regenerative medicine, does when performing operations to grow the trachea. After receiving a mega-grant from the Russian Ministry of Science, he opened a Center for Regenerative Medicine at the Kuban Medical University in Krasnodar. Its technology has already been successfully used and saves people. Bioprinting has not yet been tested even on animals. But Vladimir Mironov, Sergey Novoselov and Alexander Ostrovsky, director of 3D Bioprinting Solutions, believe that the technology they are developing has great prospects. The company buys equipment to work in Russia.

In the world, 25% of patients who need an organ transplant and do not wait for it die every year. Donor organs are sorely lacking. The long–term goal of the researchers is to solve the problem of organ shortage once and for all. The liver and kidneys are most needed. "It is the work on the production of the kidney that is included by the company's scientific group as a long–term guideline," says Alexander Ostrovsky. According to experts, the first full-fledged organ can be expected by 2030. But there is also a short–term goal on the way to a long-term one - the creation of three-dimensional fabric constructs for tissue engineering.