Neurons from the skin

Parkinson's disease is one of the most common neurodegenerative disorders along with Alzheimer's disease. Its pathogenesis is associated with the accumulation of improperly folded and phosphorylated alpha-synuclein protein and the death of dopaminergic neurons in the brain. This leads to severe progressive motor disorders and other symptoms.

To study the pathogenesis of Parkinson's disease and create therapy, various models are used — both animal and cellular. Among the latter, cell cultures based on induced pluripotent stem cells (iPSC) are distinguished. However, they have one drawback: the "reversal" of their differentiation leads to the loss of specific characteristics of neurons, including those associated with aging.

The solution may be a new approach proposed by an international team of scientists in Stem Cell Reports (Drouin-Ouellet et al., Age-related pathological impediments in directly reprogrammed dopaminergic neurons derived from patients with idiopathic Parkinson's disease). The authors obtained functional induced dopaminergic neurons (idans) from fibroblasts taken from patients with sporadic form of Parkinson's disease. Such neurons retain many properties of fibroblasts, including age-associated changes in the epigenetic clock, transcriptome and microRNA, DNA damage, telomere length and mitochondrial defects. 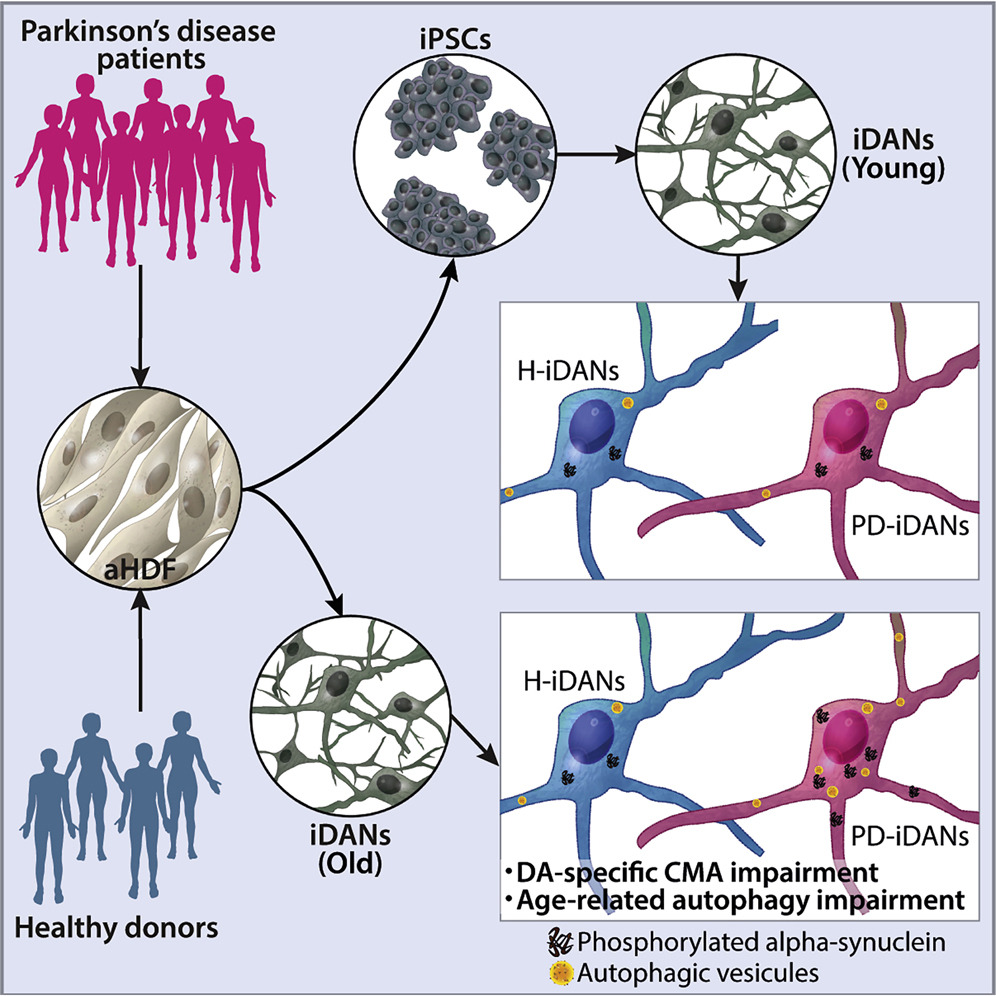 Scientists screened ten genes-differentiation factors involved in the normal development of dopaminergic neurons and expressed in the corresponding structures of the midbrain. They selected combinations that were used to reprogram the fibroblasts of 18 patients with sporadic Parkinson's disease and ten healthy controls. The correspondence of the obtained cells to the phenotype of dopaminergic neurons was confirmed using a specific MAP2 dye.

The cells reproduce well the properties of aging neurons of donors with Parkinson's disease, including a reduced level of chaperone-mediated autophagy. At the same time, stress-triggered autophagy in them leads to a characteristic accumulation of macroautophagic structures. Phosphorylated alpha-synuclein, a key molecular marker of Parkinson's disease, was also found in the obtained cells. At the same time, the corresponding pathological phenotype was not observed in neurons obtained through iPSC.

The authors emphasize that the new cellular model of Parkinson's disease reproduces the age-related changes that the donor had and develops a pathological phenotype in 25 days. In addition, directly reprogrammed fibroblasts are much easier to obtain than iPSC-based cultures.