Human neurons were embedded in the brains of rats, provoking the development of a deadly disease 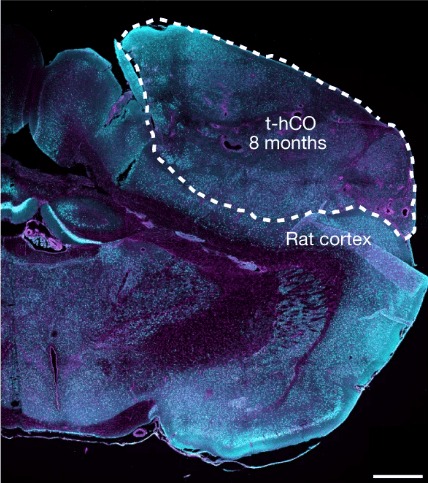 Fluorescent micrograph of a rat brain with an area made up of human neurons (dotted line). Drawings from the article by Pașca et al.

Numerous biological models that mimic our brain in a certain way allow us to move in this direction. However, all of them have limited functionality, which does not allow to achieve full compliance of the model with the real brain. One of the most advanced types of models is brain organoids.

They are obtained from human skin cells transformed into pluripotent stem cells, which then differentiate back and become different cells of the human brain (neurons, astrocytes, and so on). By growing three-dimensional structures in this way, it is possible to create, for example, organoids of the human cerebral cortex.

Nevertheless, growing organoids outside the characteristic microenvironment of the real brain reduces their usefulness in modeling genetically complex and behavior-determined neuropsychiatric disorders.

Therefore, scientists from Stanford University (USA) decided to go further and performed transplantation of human brain organoids into the brains of newborn rats (in the first week after birth, when neural networks are still being formed). As a result, human neurons were completely embedded in the rodent's brain, forming working connections and stretching their axons (long processes) throughout the animal's brain, and their activation could control behavior aimed at finding rewards. 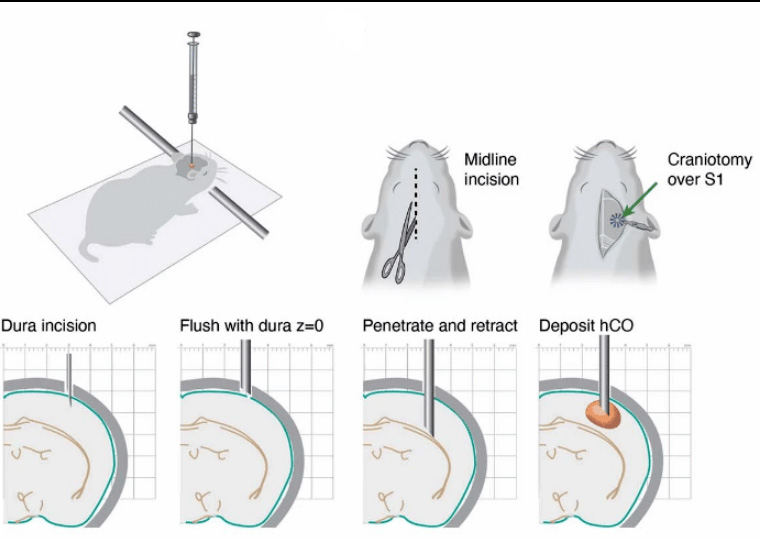 Schematic representation of the experiment design.

The scientists report on their research in an article published in the journal Nature (Revah et al., Maturation and circuit integration of transplanted human cortical organoids).

In the vast majority of animals, two months after transplantation, human organoids, fully embedded in the networks of neurons, occupied about a third of the brain hemisphere. A year later, 74% of the rats with chimeric brains were still alive (the usual life expectancy for laboratory rats is three to four years), and without noticeable violations of motor function or memory or any abnormalities at all.

At the same time, the neurons of the organoids embedded in the brain were much larger and had much longer dendrites (small processes) than those of a standard organoid.

Scientists have also noticed another important feature of such chimeric rats. At the second stage of the transplantation study, they used organoids obtained from the cells of patients with Timothy syndrome, a rare genetic disease characterized by neurological defects and physical malformations, including heart problems. After about six months, rats with such transplants showed characteristic signs of the disease associated with the activity of neurons.

According to the authors of the work, similar experiments can be carried out using organoids obtained from cells of people with disorders like autism or schizophrenia, and, perhaps, learn something new about how these conditions arise and affect the brain. In addition, this practice will be useful for testing new treatments for neuropsychiatric disorders and neurodegenerative diseases - the main cause of disability in the world.