Gene therapy helps to fight the consequences of a heart attack

NanoNewsNet based on CNIO materials: CNIO researchers treat heart attacks with new gene therapy based on telomerase enzymeThe enzyme telomerase eliminates the damage caused to the cell by aging, and is successfully used to increase the lifespan of mice.

It has recently been established that telomerase can also be used to treat diseases associated with aging.

Scientists from the Spanish National Cancer Research Center (CNIO) for the first time used telomerase for the treatment of myocardial infarction, having developed an innovative strategy: using gene therapy, they activated the telomerase gene only in the heart of adult mice, thereby increasing the survival rate of animals by 17 percent.

"Our work shows that telomerase activation may be a therapeutic strategy to prevent heart failure after myocardial infarction," say the authors of the study published in the journal Nature Communications (Bar et al., Telomerase expression conferences cardioprotection in the adult mouse heart after acute myocardial infarction). "We found that after a myocardial infarction, the heart expressing telomerase shows less dilatation, better ventricular function and fewer scars are formed in it. These cardiac events are associated with a 17 percent increase in survival compared to control animals."

In addition, everything indicates that telomerase regenerated cardiomyocytes – cells responsible for heart contractions. Regeneration of the heart muscle will counteract the consequence of myocardial infarction – the formation of scars, dense tissue that impairs heart function and increases the likelihood of heart failure.

"One of the goals of cardiology in the treatment of myocardial infarction and the prevention of heart failure is effective regeneration of the heart, but so far no significant progress has been achieved here," the researchers comment. 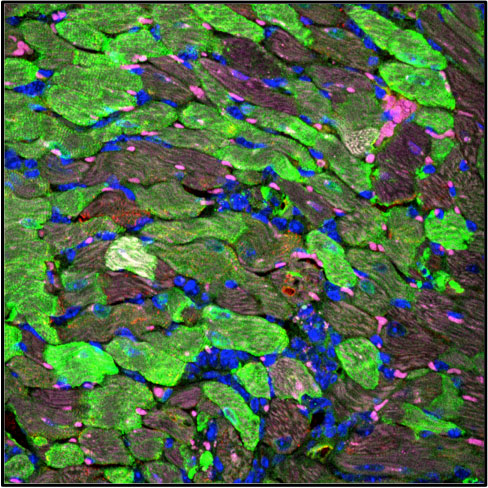 Heart failure is the most common cause of death worldwide, and one of the main factors in its development, and cardiovascular diseases in general, is aging: this process causes not only changes in the heart that make its insufficiency more likely, but also reduces the ability of the organ to regenerate.

This study is part of another project in which, in 2012, the same group developed a genetic technique for embedding the telomerase gene into an adult organism. Then it was proved that thanks to the restored ability to synthesize telomerase, mice live 40 percent longer. Now the authors are testing the hypothesis that if telomerase slows down the aging process, then it can fight age-related diseases, such as myocardial infarction.

Telomerase can reverse a cell's biological clock by restoring telomeres that protect the ends of chromosomes. Telomeres progressively contract with each cell division until they reach a critical length, after which they can no longer perform their protective function. Then the cell stops dividing and ages. At the level of the body as a whole, shortening of telomeres leads to age-related diseases, including cardiac dysfunction in both mice and humans.

Telomerase prevents telomere shortening, but in the vast majority of body cells this happens only before birth; in adult cells, with some exceptions, telomerase is not synthesized.

The authors of the study infected adult mice with a modified virus containing, along with viral genes, the telomerase gene, so that adult cells could synthesize this enzyme. In their successful 2012 work, the embedded telomerase gene was perfectly expressed throughout the body. But this time, the researchers infected only the heart. After making sure that animal heart cells express telomerase, the researchers artificially induced myocardial infarction in mice.

"Our results show that activation of telomerase in the adult heart has a positive effect on the survival of model mice after acute myocardial infarction, an effect consistent with the elongation of telomeres in myocardial cells and activation of several pathways associated with the protection and regeneration of the heart," the authors conclude. This study is "proof of the correctness of the concept of developing innovative strategies based on telomerase activation for the treatment of chronic and acute heart failure" and opens up new opportunities in the treatment of other age-related diseases.

The researchers hope that they will soon be able to test their gene therapy technique on pigs as at the stage preceding tests on the human body.

The originality and methodology make this study revolutionary from a clinical point of view, as it opens the way to completely new methods of treating heart diseases. The researchers draw two main conclusions: natural mechanisms of preservation of genetic information are involved in the protection and regeneration of the myocardium, and these mechanisms can be reactivated within the framework of therapeutic approaches applicable to patients.