Preliminary results of gene therapy of congenital deafness have been obtained

There are about 300 genetic defects that can disrupt the work of the hair cells of the inner ear. This, in turn, can lead to hearing impairment and even complete deafness. In the course of joint work, scientists from Harvard Medical School and Lukas Landegger from the Department of Otolaryngology at the Medical University of Vienna (Medizinische Universität Wien, MUW) managed to cure one of these genetic defects in experimental mice. The researchers used a modified non-pathogenic adenoassociated Anc80L65 virus. He played the role of a "Trojan horse" who delivered genes to restore the working capacity of hair cells.

The results of the work are published in Nature Biotechnology (Landegger et al., A synthetic AAV vector enables safe and efficient gene transfer to the mammalian inner ear).

Currently, cochlear implants are used for the treatment of congenital hearing disorders – complex medical devices implanted in patients. They make it possible to compensate for hearing disorders to some extent. "Nevertheless, cochlear implants with their 12 electrodes are not able to replace more than 3,000 hair cells of the inner ear. Cells allow you to hear much better," says Wolfgang Gstöttner, head of the Department of Otolaryngology at the Vienna Medical University.

Most often, congenital deafness is caused by genetic mutations GJB2 and GJB6. Because of them, the work of connexin-23, which plays an important role in the functioning of the set of cells of the inner ear, is disrupted. As a result, sensitive hairs either do not form properly or do not work normally.

Until now, no one has been able to introduce "repair genes" into hair cells and make them work again. In the course of a new study, scientists were able to correct the mutation in model animals by using an adeno–associated virus - it played the role of a vector (carrier) of genes. Unexpectedly, it turned out that the therapy restores not only the internal, but also 90% of the external cells of the cortical organ, which were considered inaccessible to gene therapy. 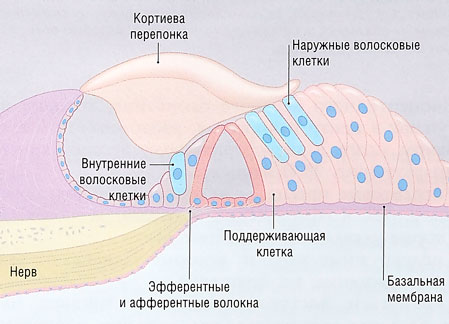