A new genetic code of overweight has been found

Membrana.ruThe journal Nature has published a report on a large-scale genetic study, which was attended by 90 thousand Europeans.

The obtained results allowed us to discover a new hereditary combination responsible for obesity, but scientists believe that this is only the beginning of the path.

The genetic basis of excess body fat has been identified for a long time, but it was not possible to identify specific "culprits" for quite a long time: those mutations that were detected during the DNA analysis of volunteers explained only unique, "family" cases of inheritance of excess weight.

In April last year, the journal Science presented the results of a study of the genetic material of 40 thousand Europeans, during which for the first time a clear sign of a genetic predisposition to obesity was identified — the FTO gene, the number of copies and "versions" of which in human DNA directly affects the amount of fat deposits.

The new project, which involved researchers from 7 countries and 77 research centers, allowed us to add another genetic combination to the piggy bank of knowledge about the causes of obesity. 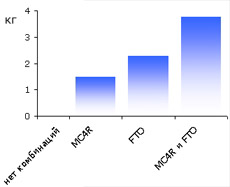 Statistically significant correlations between body fat and gene sequences were obtained during the study. People with two copies of a new genetic combination affecting the MC4R gene weigh 1.5 kilograms more on average, and those who inherited two copies of the FTO gene weigh 2-3 kilograms. At the same time, a cumulative effect is noted: the presence of both combinations can "add" 3.8 kilograms to a person (illustration MEMBRANA).

A new, unencrypted section of DNA has been identified that affects the normal functioning of the MC4R gene. This gene, in turn, is presumably the "conductor" of human appetite and is responsible for processing the energy received into fat deposits.

The study showed that new genetic combinations are present in 35% of white Europeans, and in two copies – the most harmful combination for the body – are found in 5-7%. Taking into account the fact that the mentioned FTO gene is found in 16% of the population, the problem of hereditary causes of overweight seems to be socially significant. According to Dr. Inês Barroso from the Wellcome Trust Sanger Institute, the findings will help to understand the genetic mechanisms of obesity affecting the population as a whole.

Nevertheless, the project participants emphasize that the identification of genetic prerequisites for overweight does not negate the crucial importance of a healthy lifestyle and diet for maintaining oneself in good shape.