The genome laid out diseases on the mapNikolay Podorvanyuk, Newspaper.
RuA new genetic map that takes into account over 11 thousand changes in the structure of the human genome allowed scientists to link 30 diseases with variations in the number of copies of genes.

Future work should help to find a treatment for most diseases at the genetic level.

The predisposition or increased resistance of a living organism to diseases is largely due to differences in the number of copies of the corresponding genes. This fact was established back in the 30s of the XX century, when it was discovered that drosophila flies, which had a duplication of the Bar gene (that is, the gene is presented more than once), have narrowing of the eyes. Scientists have long dreamed of linking all human diseases with genes and variations in the number of copies of genes, because knowing this information, it would be possible, by influencing genes, to rid a person of diseases. 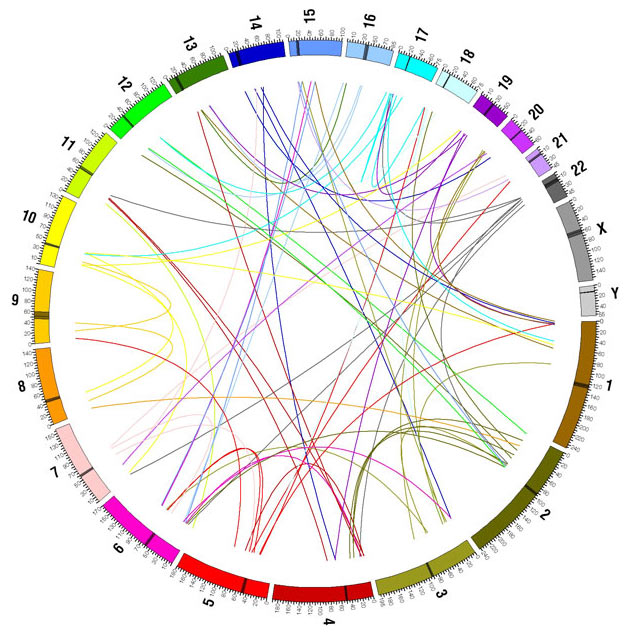 An example of a circular map of the human genome.
The lines connect the primary and new positions of 56 DNA segments, which are duplicated on different chromosomes.
The color of the line corresponds to the line of the primary chromosome // Jan Aerts

Slowly but surely, the researchers are moving towards their goal. On Thursday, the journal Nature published an article by an international group of scientists, which tells about the creation of a new genetic map of changes in the structure of the human genome. Whole segments of the code may be either missing or multiplied in the genomes of different people, such large structural changes are called variations in the number of copies of genes (CNV – from the English Copy Number Variations). The work was done on the basis of studying the genome of 450 people.

The article describes 11,700 identified variations in the number of copies of genes, 30 of which are associated with specific diseases and such individual characteristics of a person as height, body mass index, propensity to smoke, propensity to myocardial infarction, prostate cancer, hepatitis B, schizophrenia and skin sensitivity to sunlight.

Scientists admit that based on the study of current variations, they could not identify a significant number of those that could be responsible for a person's tendency to diabetes or cardiovascular diseases.

"This work is ten times larger than our first genetic map published three years ago," said one of the authors of the work, Dr. Matt Hurles of the Cambridge Sanger Institute. – It is important that we also associate variations with their specific manifestations. Now they can be considered for studying specific diseases in future studies like ours. But there is still a lot to discover and understand in this area."

In astronomy, there is such a thing as dark matter – a collection of objects that do not emit enough electromagnetic waves for modern observations, but are indirectly observed by gravitational objects that make up most of the mass in the Universe. By analogy with astronomy, the authors of the article call unknown variations in the number of copies of genes and related diseases and signs of a person the "dark matter" of the genome.

The results obtained by scientists show that any two genomes differ by more than a thousand variations in the number of copies of different genes, which is 0.8% of the human genome. Most of these variations are associated with the aforementioned duplications (duplications) or deletions (deletion of the entire gene or part of it).

"This article highlights some of the most recent results in the study of the human genome. It describes in detail the variations in the number of copies of genes, which confirms the correctness of our views on evolutionary biology," says Professor James Lapsky, Deputy head of the Department of Molecular and Human Genetics at Baylor College of Medicine (USA). – This study complements catalogs based on single–nucleotide polymorphisms - DNA variations that differ in different people by one nucleotide. The human genome is its genetic scheme. Each of us is a unique personality formed by changes in the genome and the environment. Understanding these changes will give us the key to understanding why people are different and why they have different health and suffer from different diseases. With our work, we have added a whole dimension to the space of understanding variations in the human genome."

The authors of the article based on their results obtained the minimum value of the frequency of occurrence of new mutations. According to their data, at least one out of 17 children has new variations in the number of copies of genes in their genome. In many cases, such changes will not have serious consequences, but not always. The article says that in the future it will be possible, by identifying and recording information about "bad" variations in the database, to compare the genome of newborn children with this database and, thus, it will be possible to prevent serious illness at an early age in many of them.

"This work shows great progress, but so far scientists are looking for only the most general variations," commented Steven Scherer, a researcher at the Children's Hospital in Toronto, one of the authors of the article. – There are many variations that have real clinical consequences, and even larger studies are needed to detect them. But, since real results have been obtained in recent years in the search for the connection of diseases with variations in the number of copies of genes, we can expect new results in the near future."