Huntington's disease is one of the most common neurological diseases caused by a mutation of a single gene. The features of this disease – deposits of protein aggregate in nerve cells – are inherent in Alzheimer's disease and Parkinson's disease. 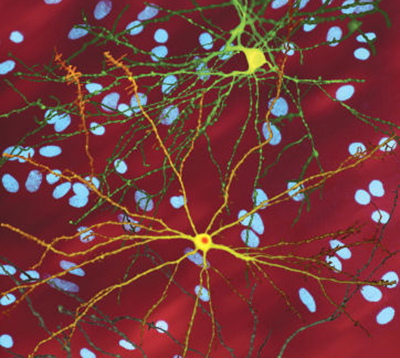 The image of the disease process is a neuron affected by inclusion corpuscles // wikipedia.org

The elongated polyglutamine tract gives huntingtin toxic properties. They may be related to the tendency of the mutant protein to aggregation or to the fact that mutant huntingtin interferes with the normal functioning of other proteins in the cell. This leads to neurodegeneration, especially noticeable in the caudate nucleus, the shell and the cerebral cortex.

At the clinical level, the patient demonstrates abnormal chaotic movements, cognitive decline (a form of dementia) and psychiatric abnormalities. The most obvious motor disorder observed in Huntington's disease is called chorea – abnormal short and irregular uncontrolled movements. Psychiatric symptoms of the disease, such as depression, are partly related to the biology of the disease and are not always a patient's reaction to its presence.

Huntington's disease usually manifests itself in mid–life - by the age of 40. However, in cases with a very high number of repetitions, the disease can manifest itself in early childhood. In some cases, when the number of CAG repeats is close to 36, the disease manifests itself towards the end of life. The longer the chain of trinucleotide repeats, the earlier the signs of the disease appear. The symptoms of the disease are similar in all patients, although there may be some differences at the initial stage. The disease continues for 15-20 years until the death of the patient.

The disease is named after the American physician George Huntington, who described it in detail in 1872. "About Chorea" is the first of Huntington's two articles, in which he carefully described the signs of the disease that he observed in a family living on Long Island.

However, there are earlier descriptions of Huntington's disease. James Guzella for the first time made a connection between the gene that causes the disease and the short arm of the fourth human chromosome. This is the first classic example of how you can detect the location of a gene on a certain part of the chromosome, based on the study of families. The subsequent identification by Guzella and a large consortium of the mutation and the gene causing the disease allowed for further accurate genetic testing and provided a key resource for modeling the disease in cells and in animals, which is critical for the development of treatment.

Numerous methods of treating Huntington's disease at the mechanistic level are currently being developed. These include strategies for reducing mutant protein expression using antisense methods (in clinical trials) and activation of autophagy. Antisense strategies involve nucleic acid oligonucleotides. They have complementary sequences of the Huntington's disease gene and reduce the amount of synthesized huntingtin. This strategy is quite rational, since the main engine of the disease is mutant huntingtin.

The protective role of autophagy

In the laboratory, we focused on the protective functions of autophagy in Huntington's disease and related neurodegenerative conditions. Autophagy is a process in which the internal components of a cell are delivered inside its lysosomes or vacuoles and are degraded in them.

We found that intracellular proteins prone to aggregation (similar to mutant huntingtin) are substrates of autophagy. It is important to note that we were the first to show that drugs that stimulate autophagy also stimulate the removal of toxic proteins. These are mutant huntingtin, mutant ataxin-3 (causing the most common spinocerebellar ataxia), alpha-synuclein (in Parkinson's disease) and tau proteins of wild and mutant type (associated with Alzheimer's disease and various types of frontotemporal dementia).

We have expanded our research from cellular systems to demonstrating the effectiveness of such drugs on diseases modeled in fruit flies, zebrafish and mice. This concept was subsequently confirmed by many research groups on various neurodegenerative diseases.

Our task is to develop this strategy to the status of clinical reality. We have conducted a number of studies to identify new drugs that induce autophagy. My colleague Dr. Roger Barker and I have completed testing one of the identified drugs on patients with Huntington's disease. 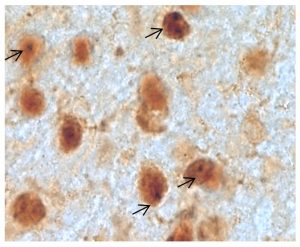 Protein aggregate in the mouse brain (marked with arrows) // serious-science.org

There are many ongoing research projects that contribute to the study of the disease. Firstly, the question of how mutant huntingtin causes the disease is being actively developed. To answer it, it is necessary to use methods of structural biology, biophysics, genetic scanning, cell biology and animal models. Some groups focus on the study of the disease at the biochemical level, trying to understand the structure of the mutant protein and its early aggregating species. Others use cellular and neural models, as well as stem cell models, to understand what disrupts the mutant protein. They are supplemented by studies on animals: worms, fruit flies, zebrafish, mice, rats and even primates and sheep. This is necessary to develop models that will allow us to understand the disease at the body level. Therapeutic strategies can be tested on such models.

Secondly, you need to understand what the functions of normal huntingtin are – they are poorly understood. To shed light on these functions, research groups use different approaches based on cellular modeling. This may affect therapeutic strategies and/or our general understanding of how the cell works.

The third goal is to identify potential therapy goals to alleviate the disease, improve existing treatment strategies. Different research groups are working on this issue; they use chemical and genetic scanning methods to identify new targets and potential drugs.

The fourth goal is to identify and characterize biomarkers of disease progression to facilitate clinical trials. This will make it possible to track the benefits of any therapeutic strategy. It would be effective to have a very sensitive scale of disease progression with a short time interval. This is important for those who are carriers of the disease gene, but do not yet have its obvious signs and symptoms. In this case, it will be possible to test the effects of potential therapeutic agents that slow down the development of the disease.