Insulin patch instead of subcutaneous injections

Researchers at North Carolina State University, working under the guidance of Professor Zhen Gu, have developed a patch for patients with diabetes. The patch is made of non-toxic biocompatible materials and allows you to quickly and painlessly solve the problem of increasing blood glucose levels. Moreover, the developers claim that the system they created can be personalized depending on the patient's body weight and the sensitivity of his tissues to insulin. 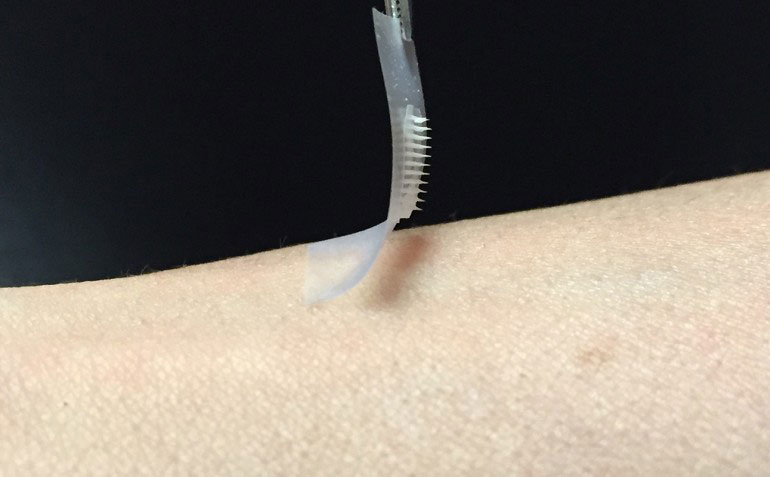 More than a hundred microneedles are attached to the surface of a thin strip of silicon oxide.
People with type 1 diabetes mellitus and severe forms of type 2 diabetes mellitus are forced to regularly measure blood glucose levels using a glucose meter, which implies pricking a finger to get a drop of blood, and self-administer subcutaneous insulin injections. These procedures are not only painful, but also risky to a certain extent. The introduction of an inadequate dose of insulin can lead to serious complications, such as loss of vision or the need for amputation of limbs, or even to such catastrophic consequences as the development of diabetic coma and death.
The authors have done everything possible to eliminate the potential risk of errors caused by the human factor. To do this, they created a closed–loop system that directly connects devices, one of which measures blood glucose levels, and the second one injects insulin.
Traditionally, such approaches involve the use of mechanical sensors and pumps connected to needle-terminating catheters. These catheters are inserted under the skin and need to be replaced every few days.
Instead of creating another completely man-made system, the researchers decided to simulate natural insulin generators, that is, beta cells of the pancreas. These cells not only secrete insulin, but also act as a depot, storing insulin inside special membrane vesicles, or vesicles. In response to increases in blood glucose levels recorded by cells, insulin is released from the vesicles and enters the bloodstream.
The authors created artificial vesicles consisting of two organic compounds: hyaluronic acid and 2-nitroimidazole. When mixed in an aqueous medium, the molecules of these compounds spontaneously form many vesicles, the inner surface of which has hydrophobic, and the outer surface has hydrophilic properties. Inside each of the vesicles, whose diameter is 100 times smaller than the thickness of a human hair, the researchers injected a solid core containing insulin and glucose-sensitive enzymes.
In laboratory experiments, when the level of glucose in the blood increased, the enzymes contained in the vesicles converted glucose into gluconic acid, which was accompanied by the absorption of a large amount of oxygen. This caused local hypoxia, which changed the hydrophobic properties of nitroimidazole to hydrophilic, which led to the rapid destruction of vesicles and the release of insulin.
As a tool for the delivery of insulin-containing vesicles into the body, the authors suggest using a patch they developed covered with microneedles. Microneedles filled with vesicles are also made from hyaluronic acid, which is the main component of vesicles. However, in this case, its denser form is used, which provides the possibility of piercing the upper layers of the skin. When applying such a patch to the skin, the microneedles covering it penetrate through the upper layers of the skin into the surface capillaries.
To test the effectiveness of the developed approach, the authors conducted experiments on a mouse model of type 1 diabetes mellitus. When the control group animals were given standard insulin injections, the glucose concentration in their blood decreased to normal values, but subsequently rapidly increased to hyperglycemic levels.
At the same time, applying an insulin patch to the skin of animals of the experimental group for 30 minutes returned the blood glucose level to normal values and ensured its maintenance in this state for several hours.
In addition, the researchers demonstrated the possibility of "tuning" the patch to change blood glucose levels only within certain limits by changing the concentration of the enzyme inside the microneedles. They also found that the use of the patch eliminates the risk of excessive lowering of blood glucose levels associated with frequent insulin injections.
Given the lower sensitivity of mice to insulin compared to humans, the researchers believe that when used in clinical practice, the stabilizing effects of an insulin patch can persist for longer periods of time. They note that the ultimate goal of the work is to create a patch that can be changed once every few days.
Article by Jicheng Yu et al. Microneedle-array patches loaded with hypoxia-sensitive vesicles provide fast glucose-responsive insulin delivery is published in the journal Proceedings of the National Academy of Sciences.
Evgeniya Ryabtseva
Portal "Eternal youth" http://vechnayamolodost.ru based on the materials of North Carolina State University:
Smart Insulin Patch Could Replace Painful Injections for Diabetes
24.06.2015
Found a typo? Select it and press ctrl + enter Print version