Nanoparticles disguised as erythrocytes are a universal antidote

Researchers at the University of California at San Diego, working under the guidance of Professor Liangfang Zhang, have created biomimetic nanoparticles by placing a core of a biocompatible polymer inside the shell of an erythrocyte. The results of the experiments demonstrated the ability of such nanoparticles, dubbed "nanocubes", to neutralize pore-forming toxins produced by many bacteria, including antibiotic-resistant strains, as well as the poisons of scorpions and snakes. 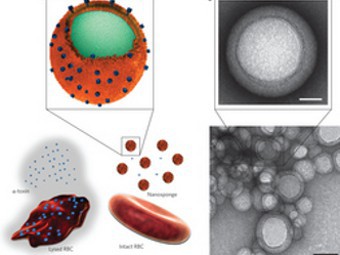 According to the authors, the membrane of one erythrocyte is enough to create more than 3,000 nanocubes, the diameter of each of which is about 85 nanometers. Since red blood cells are the main target of pore-forming toxins, nanowabs entering the bloodstream act as a "bait", absorbing and neutralizing proteins dangerous to the body.

The small size of nanocubes makes it possible to create a high concentration of them in the bloodstream, many times higher than the concentration of red blood cells, which reduces the chances of interaction between toxins and their natural targets.

Schematic representation of the structure of the "nanohub" and the mechanism of its interaction with toxins. Illustration by the authors

Currently, there are quite a lot of drugs that affect the molecular structure of pore-forming toxins, but each of these agents selectively neutralizes only one toxin. Considering that experts know more than 80 families of pore-forming toxins, each of which has a unique structure, the creation of a universal antidote is the optimal solution to the problem.

In animal experiments, the researchers demonstrated that the introduction of erythrocyte-coated nanoparticles significantly increased the survival rate of mice injected with potent pore-forming toxins: 89% of the animals in whose bloodstream the "nanocubes" were launched before receiving a lethal dose of the alpha toxin secreted by MRSA survived. The survival rate of mice that were injected with "nanocubes" after the injection of poison was 44 percent.

A liver biopsy of animals performed a few days after the introduction of the toxin and nanoparticles showed no damage. This indicates that after accumulation in the liver, both the nanoparticles and the toxins associated with their surface were processed and excreted without harm to the body.

The researchers hope to conduct clinical studies of the nanoparticles they have developed in the foreseeable future. They believe that obtaining approval from the US Food and Drug Administration will not be difficult, since the polymer filling of nanoparticles has already been approved for clinical use, and the erythrocyte membrane is a component of human blood.