Stents with nanotubes reduce the likelihood of inflammation

sci-lib based on nanotechweb materials: Nanotubular coating improves vascular stentsMedical implants, for example, stents and other similar prostheses, can sometimes cause inflammation inside the human body.

However, the latest work of scientists from the United States shows how using nanotubes can significantly reduce the risk of such an adverse outcome.

Vascular implants can cause undesirable reactions inside the body, such as restenosis or thrombosis. This is due to the fact that the body reacts to the foreign implant, producing an excess of endothelial cells lining the inner surface of blood vessels. As a result, these cells begin to "stick" to the surface of the device. Restenosis occurs when vascular smooth muscle cells surrounding the endothelial layer multiply and begin to actively secrete intracellular matrix proteins, which causes the artery that was previously treated to narrow (where the implant was installed). Thrombosis is caused by the spread of endothelial cells themselves.

One of the ways to overcome such problems is the use of stents (frames or tubes inserted into the vessel to prevent its narrowing) with a drug coating that completely stops or slows down the growth of smooth muscle cells. But practice has shown that such devices can delay the healing process of blood vessels, causing thrombosis somewhat later.

Ideally, the stent should not interfere with the development of endothelial cells, but, at the same time, should prevent the active growth of smooth muscle cells. And, it seems, in their latest work, a group of scientists from the University of California-San Francisco (USA) proposed a way to achieve this contradictory result. According to their work, the desired effect can be achieved by stents made of an alloy of nickel and titanium (also known as "nitinol") and coated with tubular nanostructures (nanotubes) also made of nitinol.

It is worth noting that nitinol refers to materials officially approved by the U.S. Food and Drug Administration (Food and Drug Administration). To date, this material is among the top three in terms of frequency of use in biomedical devices (along with stainless steel and cobalt and chromium alloy). At the same time, nitinol stents are elastic and resistant to fractures, which makes this material optimal for such applications.

According to scientists, the tubular coating of nitinol developed by them creates a surface that promotes healing. It promotes the migration of endothelial cells, but at the same time reduces the proliferation of smooth muscle cells that can cause restenosis. 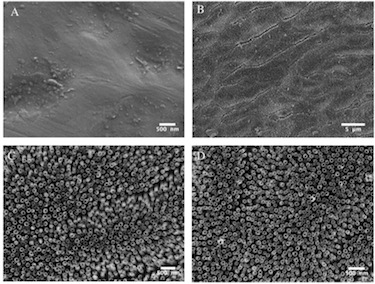 The work of scientists is described in detail in the journal Nano Letters. The researchers hope that their publication in the future will help in the development of new materials for the production of implants, as well as new stent architectures that reduce unwanted reactions without the use of additional drugs and coatings.

It is worth noting that the team is already testing new nitinol stents with a nanotube surface structure on animals.