A new approach to the determination of biological age was proposed by scientists of the Laboratory of Systemic Medicine of Healthy Aging of the UNN. The researchers conducted a systematic assessment of the age-dependent DNA methylation and identified some patterns that in the future may help to build individual trajectories of aging of each person.

The results of the study are published in Scientific Reports (Vershinina et al., Disentangling age-dependent DNA methylation: deterministic, stochastic, and nonlinear). The project was attended by scientists from the University of Lobachevsky, the University of Bologna (Università di Bologna, Italy) and University College London (University College London, UCL, UK). They studied one of the main indicators of a person's biological age – DNA methylation – a change in DNA molecules that can "turn on" and "turn off" certain genes. This process is necessary for the development of a living organism, the specialization of stem cells, the formation of tissues and organs. By measuring methylation, it is possible to understand the degree and rate of aging of the body.

Until now, when calculating the so–called epigenetic clock – a set of parameters for determining biological age - a uniform, linear change in methylation indicators over the course of life was taken into account. Nizhny Novgorod scientists, with the support of foreign colleagues, analyzed longitudinal data of 442 Swedish twins observed for more than ten years, and single data of 729 Swedish men and women. Reconstruction of individual DNA methylation trajectories has shown that this process is most often uneven and it is no coincidence. Methylation is associated with unique features of the development of the organism, both genetic and environmental (socio-economic status of a person, his lifestyle, habits, climate and much more). In men and women, DNA is also methylated, apparently in different ways. 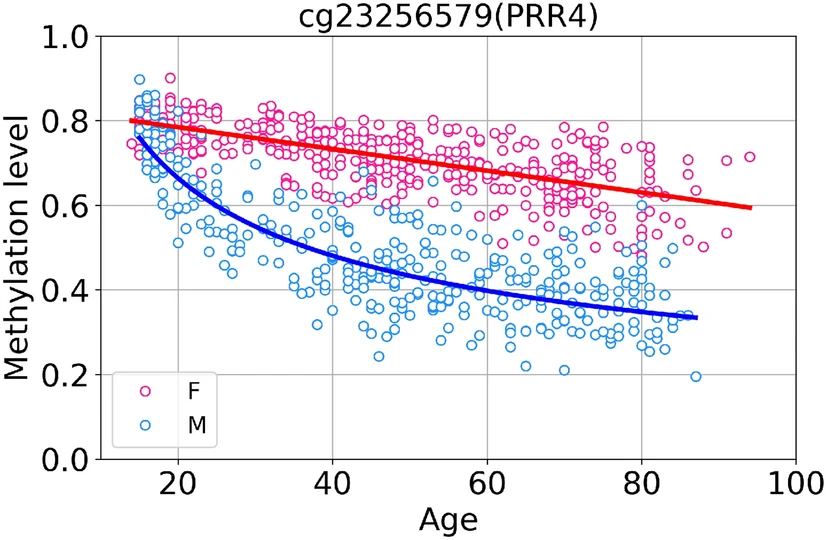 The patterns of age-related methylation for one of the CpG sites in men (blue line) and women (red line) revealed in the studied data set.

Mikhail Ivanchenko , Vice - Rector of Lobachevsky University for Research , comments:
"People are very different, but until now we didn't know how these differences affect age-related diseases, how we age. For personalized medicine, it is very important to understand the trajectories of development, adaptation, aging of each individual. The main result of our research is that we have seen that people really age in different ways."

The results obtained explain the large heterogeneity in methylation, which is observed in the elderly, as well as in people with age-related pathologies, Down syndrome, Alzheimer's disease, oncological diseases.

The authors of the study plan to develop a more accurate epigenetic clock that will take into account individual trajectories of biological age. This is another step in the study of the mechanisms of aging and the development of personalized medicine.