The maximum possible life expectancy of a person has been determined

Aging is a complex and multi–stage process that manifests itself as a progressive degradation of parts and systems of the body, which leads to the development of chronic age-related diseases, such as cancer, diabetes, cardiovascular and so on, and eventually death from them. Scientists have found it difficult to reduce the aging process to a single number, such as biological age. However, the authors of the new study – employees of the Singapore biotech company Gero PTE, the Roswell Park Cancer Center in Buffalo (USA) and the Russian Skolkovo Institute of Science and Technology and the Kurchatov Institute – managed to find out the maximum possible age of a person by studying the relationship between aging and loss of the ability to recover from stress. The results were published in the journal Nature Communications (Pyrkov et al., Longitudinal analysis of blood markers reveals progressive loss of resilience and predicts human lifespan limit).

Many types of biological clocks, implying the combined effectiveness of sleep, wakefulness and meals, assume a greater number of years lived for those who lead a healthy lifestyle and do not have bad habits. But until now, it remained unknown how quickly the biological age of each person changes over time and whether it is possible to distinguish time fluctuations from the true trend of changes in this indicator. "Human aging shows universal features common to complex systems that are on the verge of collapse. Our work demonstrates how concepts borrowed from the physical sciences can be used in biology to study various aspects of aging in order to take effective measures against it," said Peter Fedichev, co–founder and CEO of Gero.

Scientists used blood test data stored in the British Biobank to calculate a single variable – the "DOSI, dynamic organization state indicator". It turned out to be associated with factors such as age, diseases and lifestyle. This indicator increased with age in proportion to the time needed to recover from stress, that is, it reflected the physiological stability of the body. Stress was understood as any deviation from the usual state: exhausting workouts, frequent lack of sleep, colds, other illnesses, and so on. 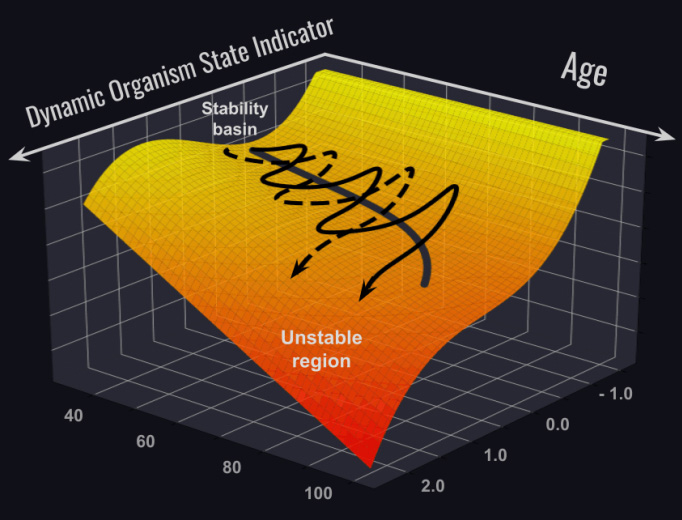 Scientists have characterized the dynamics of physiological indicators on the time scales of human life expectancy with a minimum set of two parameters. The first is the instantaneous value, often called biological age, in this work it is illustrated by the Dynamic Organism State Index (DOSI). It is associated with stress, lifestyle and chronic diseases and can be calculated based on a standard blood test. Another parameter, stability, was introduced for the first time and reflects the dynamic properties of fluctuations in the state of the body: it shows how quickly the DOSI value returns to normal after experiencing stress / © Nature Communications.

Healthy people turned out to be very stable, but its loss correlated with the presence of chronic diseases and an increased risk of death from all causes. The rate of recovery was expected to decrease with age: if 40-year-old healthy adult study participants needed about two weeks to return to "normal", then 80–year-olds - up to six weeks. The authors of the work confirmed their conclusions on the basis of two different types of biological measurements: blood test parameters, on the one hand, and physical activity levels recorded using wearable devices (that is, non-invasive method), on the other.

As calculations have shown, the final loss of the ability to recover occurs by 120-150 years. A decrease in the stability of the body was observed even in people who do not suffer from serious chronic diseases – this led to an increase in the range of fluctuations in physiological indicators. According to the researchers, the predicted loss of stability even in the healthiest and "successfully aging" people can explain why the maximum life expectancy is not growing in the world, while its average has been increasing in recent decades.

Consequently, it is impossible to noticeably prolong life by only preventing or treating diseases, but without stopping the aging process itself, which remains the main cause of the loss of physiological stability. "Our work is a conceptual breakthrough, because it defines and separates the roles of fundamental factors of human longevity: aging, defined as a progressive loss of vitality, and age–related diseases – the "executors of death" – after the loss of stability. This explains why even the most effective prevention and treatment of age–related diseases can improve only the average, but not the maximum life expectancy," said Andrey Gudkov, co-author of the study and co-founder of Genome Protection, Inc.

The concept of body stability also gives an idea of how biological age can be determined: the calculation should include several stressful events and recovery time. For healthy people, the observation period is several months and should increase with age. During this period, a reliable determination of biological age will require several data points during the recovery time, that is, ideally one measurement in a few days.