Over the past decade, doctors have actively used the method of deep brain stimulation for the treatment of neurological diseases. To date, tens of thousands of patients with Parkinsonism, muscle tone disorders and severe obsessive-compulsive disorders have undergone such a procedure. The use of this method for the treatment of epilepsy, depression, anorexia and other diseases is at various stages of testing. 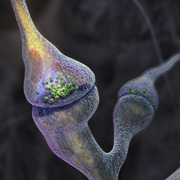 The deep stimulation procedure involves implanting a small electrode into the patient's brain. During the operation, the patient is conscious, which allows the surgeon to select the position of the electrode and the parameters of electrical impulses that provide an optimal level of suppression of symptoms. In the case of Parkinson's disease, for example, the severity of convulsive muscle twitching is often noticeably reduced almost instantly. However, despite the success of treatment, specialists know almost nothing about how electrical impulses affect biochemical processes in the brain, including how the transmission of chemical signals between neurons changes.

An implantable sensor designed to register neurotransmitters released by synapses, developed by scientists at the Mayo Clinic (Rochester, Minnesota), will help to study in detail the mechanisms that ensure the effect of this procedure, as well as, possibly, to increase its effectiveness. The new sensor is currently undergoing animal testing.

The device is a sensor electrode implanted into the brain tissue together with a stimulating electrode, a microprocessor that provides data transmission to a computer by a Bluetooth module and a power source. This system allows you to register changes in dopamine and serotonin levels in real time without using wires.

Preliminary results obtained when testing the system on pigs showed that deep stimulation of the brain area, targeted exposure to which is used in the treatment of Parkinson's disease, triggers the release of dopamine. Scientists plan to repeat experiments on animals with symptoms of the disease. For example, the sensor will allow you to determine whether there is a relationship between changes in dopamine levels and deterioration or improvement of manifestations of Parkinson's disease.

The results of preliminary tests also indicate that the new sensor can be used to register the level of serotonin, a neurotransmitter involved in the development of depression. (A number of antidepressants, including Prozac, are serotonin reuptake inhibitors.)

The developers have already received permission and have planned to test their system on a patient next month. To begin with, the sensor will be checked only during the operation, assessing with its help changes in the level of dopamine released when the position of the electrode in the brain tissue changes. The ultimate goal of the work is to introduce a sensor into the system for deep brain stimulation. Currently, researchers are working on creating electrodes that can function for a long time, and reducing the size of the device.

In the future, they plan to create a feedback system based on their invention that can change the intensity of the stimulating effect depending on the recorded changes in the levels of neurotransmitters. This principle underlies the work of heart rate drivers, who stimulate the myocardium only in the case of anomalies in its work recorded by them. However, the authors note that registering changes in the activity of neurons is a much more difficult task.

Evgeniya Ryabtseva
Portal "Eternal youth" http://vechnayamolodost.ru based on the materials of TechnologyReview: Implanted Sensor Could Provide Clues to Brain Chemistry.