Korean researchers used the ability of the roundworm Caenorhabditis elegans to move to cancer cells by smell and created a device that detects cancer cells and helps noninvasively diagnose lung cancer at an early stage. The results are presented at the spring meeting of the American Chemical Society (ACS).

Early diagnosis of cancer is of great importance for effective treatment, and screening methods should be fast, simple, cost-effective and non-invasive. Currently, doctors diagnose lung cancer using imaging studies or biopsies, but these methods often do not detect tumors at the earliest stages. Animals can come to the rescue. It has previously been shown that dogs can be trained to "sniff out" cancer in humans, but keeping large animals in laboratories is impractical. Therefore, a group from Myongji University decided to use nematode worms, which are small in size (about 1 mm in length), easily grown in the laboratory and have an extraordinary sense of smell, to develop a non-invasive diagnostic test for cancer.

Lung cancer cells produce a certain set of substances that have the ability to excite olfactory neurons and cause a sense of smell that differs from normal cells. It is known that the soil nematode C.elegans is attracted or repelled by certain odors, so the researchers decided that this worm could be used to detect lung cancer. They placed nematodes in petri dishes and added drops of several human urine samples, noticing that the worms preferably crawled to samples from cancer patients.

The group continued their work and created a chip made of polydimethylsiloxane elastomer with holes at each end connected by channels to the central cavity. 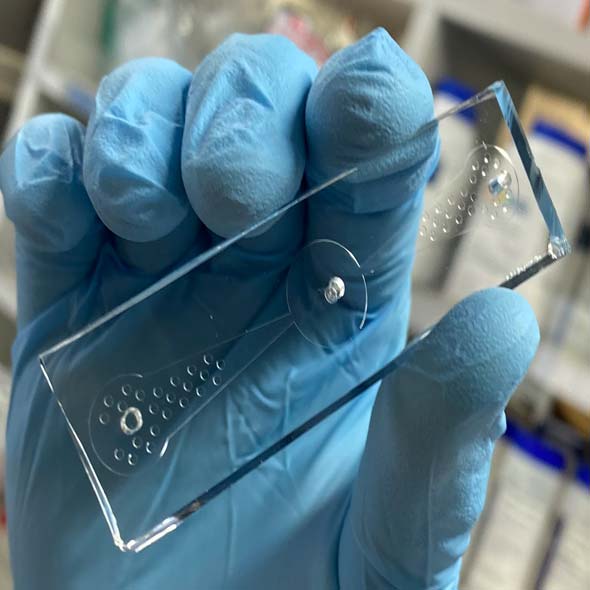 The researchers placed the chip on an agar medium. They inserted lung cancer cells into one end of the chip, and healthy lung fibroblasts into the other. C.elegans worms were placed in the central cavity. After about an hour, the result was evaluated: more worms crawled to the cancer cells than to normal ones. The researchers suggested that the worms were attracted to 2-ethyl-1-hexanol, a substance produced by cancer cells and apparently resembling a floral fragrance. When worms with a mutated odr-3 odor receptor gene were used in the same experiment, they did not exhibit such behavior.

The researchers calculated that the device with 70% sensitivity detected cancer cells in culture media. They hope to increase the accuracy and sensitivity of the method with the help of worms that have previously been in contact with cancer cells and therefore have a "memory" for cancer-specific odors. Next, it is planned to use urine, saliva or even exhaled air for the test, in order to diagnose lung cancer at an early stage with the help of a "worm-on-a-chip". In addition, the device will be tested for other types of cancer.