Russian scientists have developed a new method for diagnosing liver neoplasms based on optical technologies. It consists in using a special fine-needle probe through which light enters the tissues, and then reflection and fluorescence signals are collected, carrying diagnostic information. Thanks to a more accurate definition of the tumor, doctors will be able to increase the speed and effectiveness of treatment of patients with malignant neoplasms of the liver. The work was published in the journal Scientific Reports (Dremin et al., Optical percutaneous needle biopsy of the liver: a pilot animal and clinical study). The research is supported by the Russian Scientific Foundation.

In recent decades, the number of people who have malignant tumors of the abdominal cavity has been growing rapidly in the world. Today, liver cancer ranks sixth among the most frequently diagnosed types of oncologies and fourth among the causes of death of cancer patients. The late stages of the disease development are accompanied by high mortality, but if a tumor is detected in time, the chances of saving a person increase significantly. The gold standard among the methods of confirming liver cancer remains percutaneous puncture biopsy, in which doctors use a needle to take tissue samples from the liver. It exists in two versions: thick-needle and fine-needle aspiration, differing in needle sizes. In the first case, its diameter is more than 1 mm, and in the second – less than 1 mm. A fine needle biopsy allows you to get an aspirate from a pathological focus and causes minimal damage to the liver, and therefore the risk of complications is low. However, the probability that the test will not detect the presence of a disease (a false negative result) can reach 10%. Therefore, scientists strive to increase the effectiveness of the method. One of the promising areas is the use of optical technologies.

Scientists from the I. S. Turgenev Orel State University have developed an optical biopsy method and tested its diagnostic capabilities. It is based on the use of an optical probe with a diameter of 1 mm, which can be used in the standard procedure of percutaneous puncture biopsy of the liver. 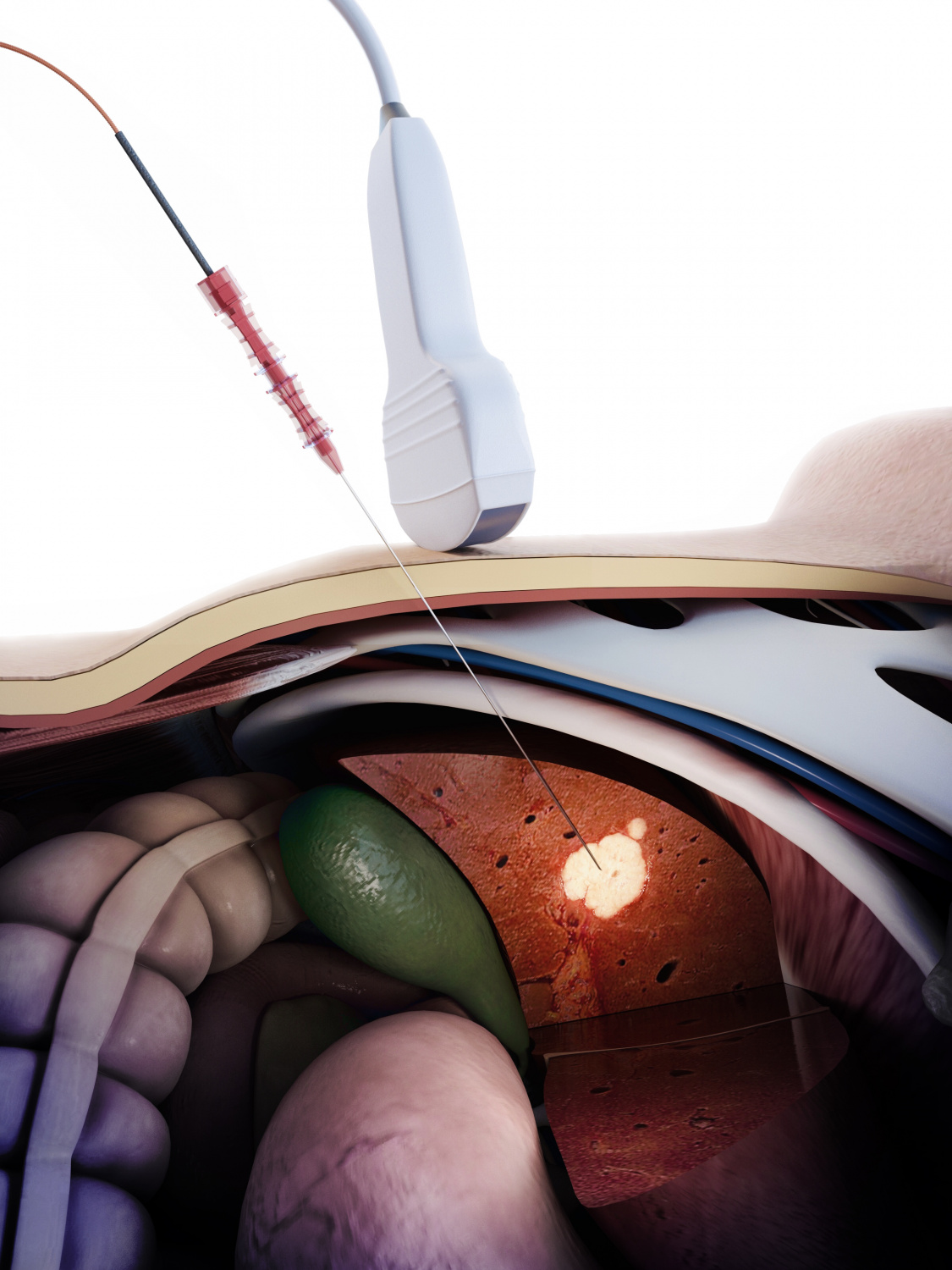 Carrying out the procedure (figure from the article in Scientific Reports).

The probe is fixed in a conventional biopsy needle, radiation is supplied through it and a signal is collected from the tissue. With its help, scientists were able to combine two existing optical technologies used to detect cancer. The first of them, the method of fluorescence spectroscopy, is based on the difference in the glow of healthy and malignant tissues under the influence of laser radiation. Another method, diffuse reflection spectroscopy, provides information about the absorption and scattering of light in tissues. Scientists analyze the reflected and re-emitted light in the form of fluorescence and, based on these data, can conclude about the state of tissues.

The authors of the work conducted experimental tests of their probe. At the first stage of the research, they tested it on mice with transplanted liver tumors. Scientists assessed the condition of the tissues affected by the tumor. The approach proved to be effective, and at the next stage, clinical trials were conducted at the Orel Regional Clinical Hospital. 20 patients with liver neoplasms took part in them. The results obtained with the optical probe were consistent with the data of instrumental and morphological research methods, which means that the new approach is effective.

"The introduction of optical biopsy technology into the algorithm of the standard procedure will significantly improve the quality of assessment of the state of biological tissues and diagnosis of pathological changes. Optical methods allow obtaining information in real time, which determines the beginning of specific treatment and the possibility of rapid assessment in dynamics," commented Andrian Mamoshin, Candidate of Medical Sciences, Associate Professor, surgeon of the Orel Regional Clinical Hospital and senior researcher at the Scientific and Technological Center of Biomedical Photonics of the I. S. Turgenev Orel State University.