The human nervous system contains about 100 billion neurons, which are connected by branched processes — axons and dendrites. The electrical signal enters the neuron through the dendrites, and is transmitted to the following neurons through the axons. A bridge for transmitting a neural impulse between the axon of one neuron and the dendrite of another is called a synapse. It is an important component of the nervous system, which is responsible for learning.

Scientists are developing artificial synapses to create biosimilar information processing systems that will solve complex tasks related to recognition, prediction, and modeling of individual and group behavior. Further development of these technologies may lead to the implementation of electronic devices that will save people from atrophy, loss of sensitivity and ruptures of nervous tissue.

In a computer, the processor and memory are two different devices that do not affect each other. When the information is recorded, the memory cells are filled and nothing more. Access to the memory is open, it is easy to erase or restore it, but these actions do not affect the properties of the processor. In the brain, the situation is different: the same elements both store and process information. Synapses play an important role in this. By memorizing information, we not only fill memory cells, but also change the configuration and connections between the elements of our processor. This is the first fundamental difference between the architecture of the human brain and the computer.

The second fundamental difference is that any computer with one core performs operations sequentially, one after the other. In the brain, information is processed in parallel, so the brain copes with recognition and prediction easier than a computer.

Now, together with the Institute of Fundamental Medicine and Biology of Kazan Federal University, we are working on a prosthetic spinal cord consisting of numerous electronic analogues of neurons and synapses. It is assumed that it will provide an interface of living systems and electronic devices, which will help people with damage to the motor functions of their legs to walk again.

In 1949, physiologist and neuropsychologist Donald Hebb formulated the rule of synaptic learning, which has long been the main paradigm in this field. If two neurons are connected to each other, then the strength of the synaptic connection increases with the synchronization between the activity of the first and second neuron. If we apply the rule for electronic networks, we can consider two nonlinear threshold elements and a conductor between them. A conductor should increase its conductivity as often or for a long time it is used to transmit a signal from one non-linear element to another. The modern interpretation of the Hebb rule is called STDP (spike-timing-dependent plasticity), a biological process that regulates the synchronization of neuronal activity and spontaneously establishes causal patterns.

STDP describes the possibility of learning without a teacher. The spike — the form of a nerve signal — on the second neuron should be later than on the first, and the strength of the synapse increases depending on the time interval between the spike of the first and second. If this time is on the order of a millisecond, then the spike on the first neuron will be the cause, and the spike on the second will be the effect. The more often this is repeated with less time delay, the more the causal relationship between the two events is strengthened. If, on the contrary, a spike occurs on the postsynaptic neuron earlier than on the presynaptic neuron, then this connection is suppressed.

At the dawn of computing technology, people used computers to better understand the structure of the nervous system and brain. In the late 1940s, Frank Rosenblatt, an American psychologist, proposed a system he called the perceptron. This is an artificial neural network of one or more layers, in which nodes — threshold elements — play the role of neurons, and each node of the previous layer is connected to the node of the next one due to a connection that allows changing the weight function of signal transmission. Initially, the connections within the system have arbitrary values. However, if a criterion is selected for classifying objects, then the system can be trained by applying external stimuli.

Our first paper on the implementation of electronic elements with synapse properties was published in 2005. We managed to make a memristor device that behaved like a synapse: it changed the resistance depending on the direction of the current and the amount of ion charge passed.

The computer is able to learn with the help of a teacher (supervised learning). In 2015-2016, we published two papers on the perceptron — an artificial neural network — using memristor devices as elements capable of changing the transfer weight functions (similar to the role of the synapse in the nervous system), and in 2019 we created a system capable, like Pavlov's dog, of unsupervised learning.

In 2009-2011, as part of the implementation of the European project (BION), we managed to reproduce the part of the snail's nervous system that is responsible for training during feeding, — recalls a simplified version of Pavlov's dog.

The snail perceives the mechanical touch of the lips as a neutral, if not a negative stimulus. However, if you touch the snail's lips with sugar, it associates a neutral touch signal with the presence of food. The mollusk opens its mouth and starts the digestive process. If this is repeated several times, the snail reacts in a similar way, even if the touch occurs without sugar. This work is of interest because it implemented not only the learning function, but also the architecture of the nervous system responsible for such learning. Our partners from the University of Warwick in England, using a system of implanted microelectrodes, restored the model and architecture of the part of the nervous system responsible for such training. With the help of memristor devices, we reproduced the learning functions and got as close as possible to the architecture of the brain of a real animal.

We work with simpler systems, such as areas of the spinal cord. Currently, we are trying to reproduce the functions of the part of the spinal cord responsible for walking. If successful, we hope to make an implant of the nervous system and at least partially restore motor functions.

The world of organic compounds has a unique opportunity — self-organization. Using specially synthesized block copolymers, conductive polymers and gold nanoparticles, we have made a three-dimensional network of memristor devices containing about 100 billion elements per square millimeter, which is 5 orders of magnitude less than the number of synapses in the human nervous system. It turned out that the properties of the system depend on the learning method: by changing the algorithms, it is possible to achieve child (imprinting) or adult learning.

There are 10 16 nerve connections in the brain of a newborn baby. In the process of personality formation, some are strengthened, while others are suppressed, as a result, individuality is formed. Moreover, at an early stage (children's education), stable connections are formed that practically do not change all their lives. Adult learning, on the contrary, is responsible for the formation of short-acting connections, which are determined by changing input information.

At the same time, it should be noted that the genetic factor also plays an important role. The closer the architecture of the connections induced during childhood education is to the genetic predisposition, the stronger and more durable they are. By changing the learning algorithm, you can switch from child learning to adult learning, which is enhanced or weakened depending on the situation in which a person is.

An organic memristor device consists of a heterojunction of a conductive polymer — in our case, polyaniline — and a solid electrolyte. In the oxidized state, the polymer is a good conductor, and in the reduced state, it is a dielectric. The difference in the conductivity of states is up to 8-9 orders of magnitude.

Together with the group of Professor Rustem Khazipov from the Institute of Fundamental Medicine and Biology (KFU), we managed to take the first step towards creating a synapse prosthesis. We tested our devices on rats. Two neurons were randomly selected in the brain of animals, and before connecting a memristor device, it was checked that these nerve cells were not connected by natural, biological synapses. After the experiment, both nerve cells were connected with an organic memristor device. It was shown that the spikes of the first nerve cell gradually increased the transfer function, the strength of the synaptic connection, which led to the fact that the second nerve cell began to generate spikes after the strength of the synaptic connection exceeded a certain threshold value. As a result, as the synaptic connection increased, the time interval between the spike on the second and first neurons decreased to the value of three microseconds, which corresponds to the processes in the nervous system of living organisms.

In the second experiment, we did not excite the first neuron: it was transferred to a state of natural adhesion. However, in this case, similar dependencies were observed. Our work was the first when an electronic device played the role of an element of a living system. We have taken the first timid step towards the creation of prosthetic synapses. 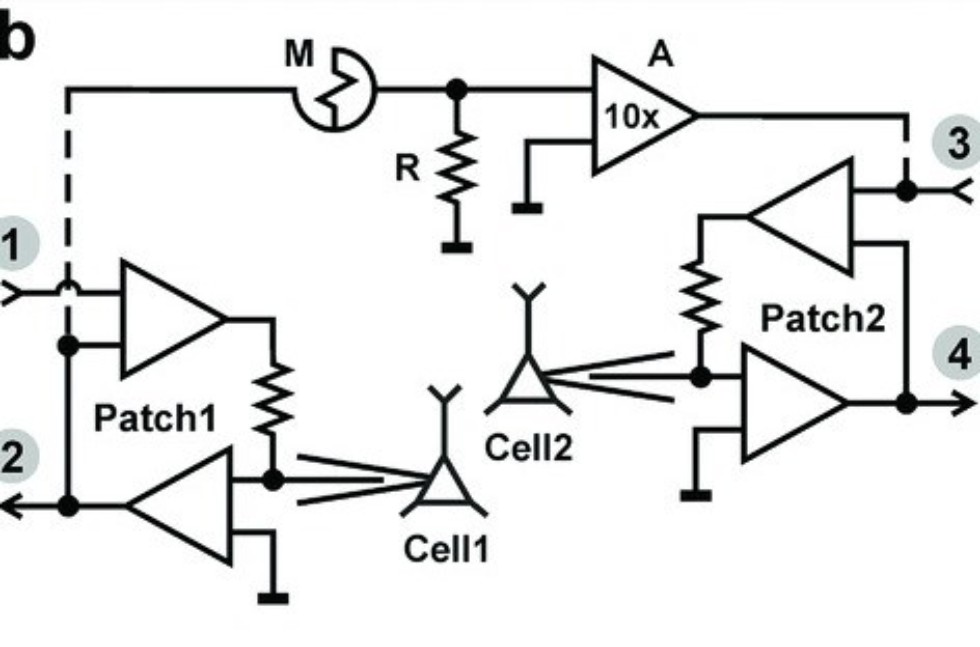 The Future of artificial synapses

There are 10 16 synapses in the human brain: it has a complex structure, so we will not repeat it soon. But if studies with the spinal cord are successful, we hope that in five years our devices and systems will help people restore sensitivity, motor skills and the ability to walk, even if the lesions are congenital.

We are working in several directions at once. In Italy (Institute of Materials for Electronics and Magnetism, Italian National Research Council, Parma) we are researching the implementation and characterization of organic memristor devices. At Kazan Federal University, we focus on connecting our devices with elements of the nervous system of animals and humans.

About the author:
Viktor Erokhin is a candidate of Physical and Mathematical Sciences, Professor at the University of Parma, senior Researcher at the National Council for Science of Italy.