The cause of stroke is intestinal microflora

The gut microbiota was able to provoke a stroke

Scientists from the Perelman School of Medicine at the University of Pennsylvania have found that the formation of cavernous hemangiomas is influenced by the composition of the intestinal microflora. They were able to identify a receptor whose work significantly affects the formation of hemangiomas. It is called TL4 and is activated by lipopolysaccharides of gram-negative bacteria. Blocking this receptor or taking antibiotics significantly reduces the likelihood of developing the disease. The study is published in Nature (Tang et al., Endothelial TLR4 and the microbiome drive cerebral cavernous malformations).

Cavernous hemangiomas are a cluster of thin–walled dilated vessels in the brain, the appearance of which can lead to a stroke. It is known that the formation of such hemangiomas occurs due to a malfunction of a special protein complex (CCM complex) in the endothelial cells of the cerebral vessels, which suppresses the MEKK3–KLF2/4 signaling pathway. This disease occurs on average once per one hundred to two hundred people, and in eighty percent of cases it is a sporadic disease that occurs in the elderly, and in the remaining twenty it is hereditary. There are still no effective medications that can suppress the formation of hemangiomas in such patients.

In working with mice also susceptible to this disease, scientists were able to find out that the occurrence of hemangiomas is affected by the activation of TLR4 receptors in endothelial brain cells. When the TL4 receptor was removed or its functions were blocked, the probability of hemangioma formation in mice decreased sharply.

Since TL4 is a receptor for lipopolysaccharides of gram-negative bacteria, scientists decided to test how the composition of the microbiome affects the occurrence of hemangiomas. It turned out that keeping mice in sterile conditions, as well as the introduction of an antibiotic, leads to a significant decrease in the likelihood of hemangioma formation. On the contrary, the introduction of laboratory-grown resistant mice of bacteria such as Bacteroides fragilis, in nine out of sixteen individuals caused the appearance of the disease. Separate administration of bacterial lipopolysaccharides also stimulated the development of hemangiomas. 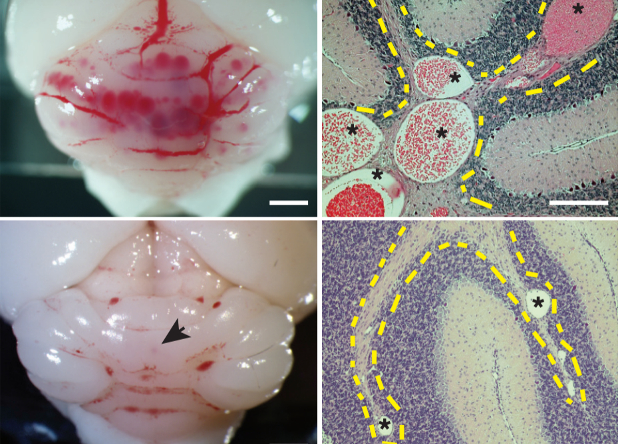 Formation of cavernous hemangiomas in the brain susceptible to the disease
(top) and resistant (bottom) mice (from an article in Nature).

This echoes the data concerning human patients carrying a mutation in the genes encoding the CCM complex. Some of them suffer from cavernous hemangiomas, and some do not, which suggests the presence of additional factors affecting the work of the MEKK3–KLF2/4 pathway. It turned out that TL4 and its CD14 co-receptor are expressed differently in such patients, which, apparently, explains the differences in susceptibility to the disease. Those patients who had more TL4 receptors in endothelial cells were more likely to develop hemangiomas.

Microbiome research has recently become increasingly popular. A number of studies have shown that the composition of bacteria living in humans and other animals correlates with the most unexpected phenomena – with a tendency to schizophrenia, with growth retardation and, apparently, affects life expectancy. New data concerning the effect of TL4 and the microbiome on the development of cavernous hemangiomas will help in the development of drugs against this disease – and it will not necessarily be necessary to look for methods of blocking receptors safely for humans if the desired effect can be achieved by changing the bacterial composition of the intestine.