Harvard physiologists repulsed the attack on the "protein of youth"

Daniil Kuznetsov, N+1
A group of physiologists from Harvard University has once again confirmed the important role of GDF11 (growth differentiation factor) and GDF8 (myostatin) proteins for rejuvenation of the body – reducing the thickness of the heart muscle, the growth of blood vessels, neurons and skeletal muscle recovery. The new study was carried out in response to the criticism of another group of scientists from the Novartis Institutes for Biomedical Research (Novartis Institutes for Biomedical Research), who questioned the discovery of the Harvard group and suggested a strictly opposite role of the GDF11 protein in the aging process. The work was published in the journal Circulation Research (Poggioli et al, Circulating Growth Differentiation Factor 11/8 Levels Decline with Age).
The new work turned out to be an almost complete repetition of the study by the same authors from 2013, and also included a test of the methods of the group from Novartis. The fact is that since the 1950s it has been known that with heterochronous parabiosis - the creation of a common blood circulation system between a young and an old mouse, the heart tissue of an older animal is rejuvenated (you can read more about this here). First of all, the mass of the myocardium (heart muscle) decreases, which is believed to be responsible for a number of cardiac disorders. Harvard scientists have suggested that these changes are associated with some specific biological factors circulating in the blood. 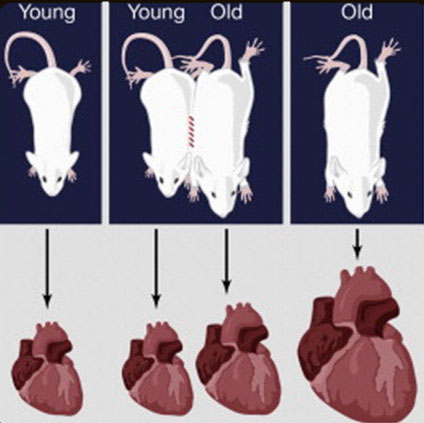 Heterochronous parabiosis in mice is able to reduce the size of the myocardium in an elderly mouse.
To do this, a single blood circulation system is created between two mice.
Illustration: Leinwand, L.A., & Harrison, B.C. / Cell
Immunochemical analysis of mouse plasma showed that the concentration of GDF11 decreases significantly with age. The functions of this protein are still poorly understood, but it is known that it is similar to myostatin (GDF8) and affects bone growth. GDF11, as Harvard found out, was able to reduce the size of the myocardium and reduce the number of cardiomycites (cells of striated muscle tissue of the heart muscle), as well as enhance the growth and regeneration of muscle and nervous tissues (including enhancing the sense of smell in rodents).
In May 2015, a group from Novartis questioned these results precisely because of the similarity with myostatin, which is known to be a negative regulator of skeletal muscle growth, as it prevents the differentiation of muscle stem cells. Experts from Novartis came to the conclusion that Harvard physiologists who used protein detection on the principle of antigen – antibody could not distinguish between myostatin and GDF11, as a result of which they mistakenly interpreted the results of the tests and in fact the amount of GDF11 increases with age.
However, the work of scientists from Novartis did not provide a new explanation for the effectiveness of parabiosis, but played into the hands of the drug Bimagrumab (Bimagrumab), which is undergoing clinical trials, serving to treat muscle loss and progressive weakness. Its action is precisely based on the inhibition of myostatin, and probably GDF11. In their new study, Harvard scientists, in turn, demonstrated that it was the experts from Novartis who misinterpreted the results, mistaking for GDF11 immunoglobulins, the concentration of which really increases with age.
Thus, even if scientists have not managed to discover the "source of eternal youth", at least there is a high probability of creating new forms of highly effective therapy for heart failure in the elderly.
Portal "Eternal youth" http://vechnayamolodost.ru
23.10.2015
Found a typo? Select it and press ctrl + enter Print version