The first person who will live to be 150 years old is now, perhaps, already 60
Ilya Ferapontov, RIA NovostiScientists in the coming years will be able to create technologies that can stop aging and extend human life expectancy by at least 30 years, and in just 20 years after that, there may be a way to bring it up to 1000 years, while the therapy itself will be free, according to the British gerontologist working in Cambridge, the head of the Methuselah Foundation, Aubrey Aubrey de Grey, the creator of a new approach to the fight against aging – the "engineering method". 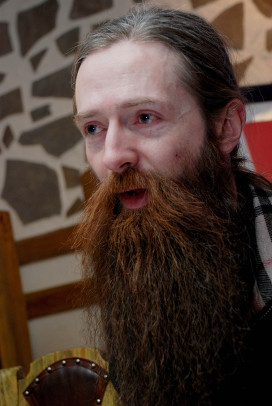 "I believe that we will be able to defeat aging in the near future. There is a 50 percent chance that the person who will be the first to live to 150 years old is already living, and he is now 60 years old," di Gray said on Saturday at a meeting with journalists in Moscow organized by the Dynasty and Science for Life Extension foundations.

The head of the Methuselah Foundation, who himself looks like a biblical patriarch because of his waist-length beard and long hair pulled into a ponytail, came to Russia for the first time and will stay here until March 4. He intends to meet with Russian scientists, hold a number of public lectures, and discuss possible cooperation with Russian foundations.

The gerontologist believes that it will be possible to create a situation of "the second cosmic escape velocity from aging", in which science and medical technologies will develop at such a rapid pace that the gain obtained at the first stage in 20-30 years will be enough to develop new methods of combating aging, which will buy time for the development of a new generation of technologies.

"Engineering" against agingDi Gray noted that now most scientists agree that aging is not associated with a genetic program of self-destruction, allegedly embedded in the body, but with the accumulation of defects, damage, which then lead to disease and death.

One of the approaches to combating aging – gerontological – involves preventing the appearance of defects, the other – geriatric – is based on the fight against the transition of defects into diseases.

The British scientist believes that both of them are ineffective, because the metabolic processes that cause damage are very complex, so preventing defects from appearing is a very difficult task. It is no less difficult to prevent the disease.

Therefore, he created a third approach, which he called "engineering", which involves dealing directly with the defects themselves. Di Gray named seven categories of biological processes that generate defects. In particular, this is a reduction in the number of cells or, on the contrary, their excessive growth, the accumulation of "garbage", slags inside and between cells, genetic mutations in chromosomes and mitochondria, as well as the formation of excess bonds between protein molecules.

The scientist emphasizes that not a single new category of damage has been identified since 1982, while "counteraction" technologies have been developed for many of them. It is the limited number of types of possible defects that makes the fight against them an effective method of countering aging.

According to the scientist, "serious progress" has already been made in creating methods to counteract damage. In particular, one of the research groups has created bacteria capable of splitting "one of the most unpleasant" types of cholesterol associated with sclerotic deposits in blood vessels. Another group is working to prevent mutations in the mitochondrial genome.

"We have already advanced technologically enough to create a therapy that will give us the opportunity to live up to 150 years. In ten years we will be able to try it on mice. We don't know how long it will take to go from mouse to human, but we think there is a 50 percent chance that this process will take about 15 years," di Gray said.

"It may take a little longer, there is a 10 percent chance that we will not reach the point where a person can live up to 150 years over the next hundred years," the scientist admits, but he notes that a 50 percent chance is worth trying.

Immortality for nothingDi Gray admits that the cardinal prolongation of human life will create many complex social and psychological problems, and, perhaps, will become a drama for all mankind.

At the same time, he emphasizes that humanity will achieve longevity in a period long enough for it to be able to adapt to it.

Speaking about the possible threat of overpopulation due to life extension, he compared it with the spread of hygiene skills, which also significantly increased life expectancy at the time: "Doctors found out that washing hands before surgery significantly increases the number of survivors. And they did not think that this would lead to overpopulation, but began to save lives."

The head of the Methuselah Foundation admits that it will take "a lot of money" to develop anti-aging remedies, but he is sure that the procedures themselves to stop aging will be free.

"The state will make the relevant procedures free of charge, because now a huge number of people are experiencing problems due to aging. From the point of view of society, it will be economically advantageous to fight aging," the scientist said.

In his opinion, for the same reasons, developed countries will share technologies with developing countries, as now Western countries supply drugs for the treatment of AIDS to African countries.

The main thing is to convince societyThe Methuselah Foundation, run by Dee Gray, is a US–registered charitable organization that was created to activate scientific research in the field of radical life extension.

The fund's budget in 2008 was $2 million. The Foundation has established the "Methuselah Mouse Prize" – the M-Prize – which will be awarded to a group of scientists who have achieved record life expectancy of mice.

Di Gray himself has now practically retired from scientific activity, although he has a doctorate degree and has published only about 30 articles in scientific peer-reviewed journals, where he is the main author. He conducts active organizational and popularization work.

Answering a question from RIA Novosti whether it does not seem more effective for him to influence governments than to try to look for charitable funds, di Gray replied that it is necessary to work in both directions.

He added that he coordinates his efforts with other organizations lobbying for anti-aging research in the government.

"The government has a lot of money, more than any individual, but governments don't like to finance things that are unpopular with ordinary people," the scientist said. Therefore, one of the main tasks is to popularize these studies in society, he believes.