Prolonging life without a low-calorie diet

As part of a joint work, researchers at Johns Hopkins University and National Taiwan University, working under the leadership of Professor Jeff Boeke, demonstrated that acetylation of the Sip2 protein increases the replicative lifespan of yeast, that is, the number of divisions that a yeast cell is capable of during its lifetime.

Acetylation is the substitution of hydrogen atoms in organic compounds with a residue of acetic acid (acetyl group); acetylation of proteins can significantly affect their functions – activate or suppress up to shutdown.

Scientists have found that as the yeast cell ages replicatively, the level of acetylation of the Sip2 protein decreases. To study the potential effect of manipulations on this protein on the replicative lifespan of yeast, they compared the number of divisions that ordinary and modified cells are capable of by removing budding daughter cells.

It turned out that the genetic modification, providing an increase in the level of Sip2 acetylation, increased the average replicative lifespan of yeast from 25 divisions to 38, that is, by about 50%.

The researchers note that the biochemical mechanism they discovered is currently the first known mechanism for increasing life expectancy, in no way related to the processes triggered by a low–calorie diet and mediated by the metabolic pathway modulated by the protein TOR - the target of rapamycin, which has recently attracted the attention of researchers. (TORC1 in the figure for the article in Cell is a multi–protein complex, in which TOR is sensitive to rapamycin). 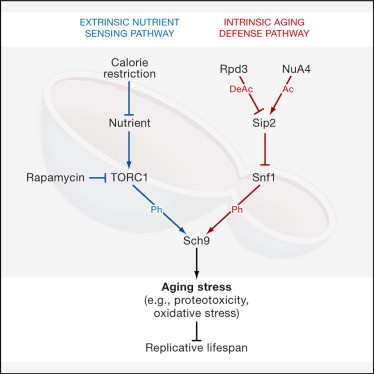 Now the authors of the work plan (hopefully, just for starters) to study the possibility of using the approach they developed to increase the lifespan of mammalian cells.