Secrets of longevity from Professor Shabalin

For elderly people, cardiological diseases are the most relevant. An elderly patient, as a rule, has a complex of pathological and chronic abnormalities. Therefore, a special approach is needed to him, it is important to understand his biological state, and then determine the tactics of treatment. 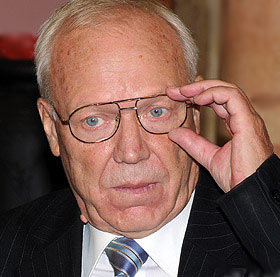 This approach is the basis of the report of the director of the Russian Gerontological Research and Clinical Center of Roszdrav, Academician of the Russian Academy of Medical Sciences, MD, Professor Vladimir Shabalin at the II International Congress "Cardiology at the Crossroads of Sciences", which began its work today at the Tyumen Cardiology Center.

Vladimir Shabalin has been heading the Gerontology Research Institute since its foundation, or rather the transformation from the Research Institute of Clinical and Experimental Immunology, which remained in Kiev after the collapse of the USSR.

Vladimir Nikolaevich's research interests include physiological and biochemical processes of the body's involution and the development of measures for their stabilization and prevention, immunological and immunogenetic problems of human aging, the role of the body's fluid systems in the aging of cells and tissues. Together with his colleagues, he develops methods of treating diseases of elderly people and endoecological methods of rehabilitation of elderly patients.

– My report is devoted to the pharmacological features of the elderly: with age, the whole structure, all metabolic processes change, and the effects of medicines on the body of an elderly person differ significantly from the effects of the same drugs if they are taken by young people. I showed these features so that doctors would remember them when they have to deal with an elderly patient.

The second direction that I am presenting at the congress together with Professor Svetlana Shatokhina is a pioneering development, we have been working on it for a quarter of a century, this is a new direction created in our country – morphological features of biological fluids. Svetlana Nikolaevna will present to her colleagues a report on the morphological features of blood serum that occur when there is a violation of the heart rhythm and other functions of the heart.

At what age is it time to talk about age? There is such a thing as heterochrony, it means that every human organ, every cell, every molecule ages according to its own time program and at a different pace. And people all age differently, the biological age of a person and the chronological age, as a rule, do not coincide. The pace of aging is ragged: sometimes a person can keep his youthfulness up to 60 or 70, and then – a sharp break. A person can have an excellent intellectual system, memory, logic, but the heart is useless, the liver is failing. And vice versa: a physically strong and somatically healthy person with a low level of intellectual system.

These features need to be taken into account. And the aging processes should be evaluated not by chronological age, but by biological age. It is the understanding of biological age that gives the basis for applying certain actions in the treatment of a patient.

– But doctors most often say to old people: "What do you want? Your age is so..."– This is a formal approach, the desire to move away from more complex problems that arise at a certain age in patients.

This trend is not only among doctors, but also in everyday life, in the social sphere, such motivations: to move an elderly person somewhere far away, to create conditions so that he does not bother us. But these motivations are completely irrelevant now.

Now another motivation is being developed: attracting elderly people to active economic and social activities. This is important not only for the state. When a person is in an active state, surrounded by people, in constant communication, when his intellectual and somatic apparatus are in operation, this is the best guarantee for human life expectancy and for its higher quality. It is important to know that those who do not lock themselves in their inner world live longer, but worry about loved ones, about friends. The main thing is movement. Evolution doesn't like lazy people. They pass away earlier than hardworking people, such is the iron law.

Recently, the scientific significance of gerontology has become of particular importance. Indeed, during the twentieth century, the average life expectancy has doubled. At the end of the XIX century, the average life expectancy was 35-40 years, and at the end of the XX and the current XXI century it became 70-75. Of course, this also led to an increase in the group of elderly and senile people. Moreover, if during the 20th century the population increased 4 times, and the number of people over 60 years old increased 5-6 times.

The number of centenarian citizens has also increased: in 59, there were several dozen such people, and in 2002, according to the population census, 6,700 centenarians lived in Russia. And this group of people is increasing.

– And what is the secret of longevity?– With a deep and thorough clarification by various experts of the peculiarities of the lifestyle of centenarians, it was noted that, as a rule, they are calm, balanced people, they are sociable, friendly, show a high interest in the events and phenomena of the surrounding world.

Of course, life expectancy depends on the individual characteristics of a person's behavior – his preferences and habits, temperament, working capacity, strong-willed qualities, intellectual, spiritual and cultural development. But longevity is also determined by a person's state of mind, his self-esteem, the idea of his own importance to others, on how much he himself considers his own existence necessary and justified. At the same time, it was found that no exotic diets, elixirs or medicines provided longevity to anyone.