Cancer and aging are two sides of the coin 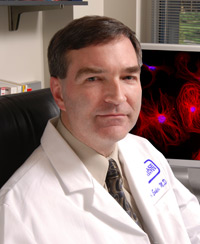 The risk of developing malignant diseases increases with age. Experts have long suspected the existence of a kind of evolutionary compromise, implying that a high risk of cancer has to be paid for a longer life expectancy. Scientists at the Fox Chase Cancer Center (Philadelphia, Pennsylvania), working under the guidance of Associate Professor Greg H. Enders, have received direct evidence of the existence of such a compromise.

Enders, who works within the framework of programs on the study of cancer biology, as well as epigenetics and progenitor cells, presented data at the 102nd Annual Congress of the American Association for Cancer Research, held April 2-6 in Orlando, Florida, according to which the key protein suppressor of tumor growth p16 provokes premature aging of mice.

Specialists have long known that the absence of the p16 tumor suppressor gene is associated with the formation of numerous tumors. However, until now they knew almost nothing about the role played by the protein product of this gene in the functioning of healthy cells and tissues. To study this issue, researchers have created a line of genetically modified mice that allows them to control the expression of the p16 gene in various tissues at different stages of animal life. When working with these mice, they quickly discovered that activation of the p16 gene blocks cell division in normal tissues.

The cessation of cell proliferation caused by the p16 protein in animals that had not reached adulthood caused them to develop symptoms of premature aging. According to Enders, this model is the first to demonstrate the manifestations of premature aging in the absence of macromolecular damage. In this case, aging is solely the result of the cessation of cell proliferation.

Earlier studies have shown that p16 protein accumulates in aging tissues, but new data indicate that this protein is not just a marker, but one of the causes of the aging process. Scientists have also received preliminary evidence that the symptoms of early aging of young animals can be eliminated by "disabling" the p16 gene.

The experiments also shed light on the mechanisms by which the p16 protein suppresses the formation of tumors. A detailed study of the intestinal tissue of wild-type mice and genetically modified animals showed that the p16 protein accumulates in the stem cells of this tissue and prevents their division. Moreover, the expression of p16 suppressed the formation of tumors in the mouse model of bowel cancer. Comparing these two observations, the researchers suggested that p16 suppresses tumor growth by limiting the proliferation of both precancerous stem and malignant cells. They are currently testing this hypothesis.