One of the ancient hypotheses of the nature of aging postulates that it follows from a certain limitation of the "resources" of the body, which it can spend either on reproduction or on some other functions aimed at prolonging its life (repair, for example). That is, roughly speaking, because of some fundamental physical limitation of their resources, organisms can either live for a long time or multiply a lot.

The proponents of this theory, however, do not specify exactly what resources the body lacks. Food? Water? Oxygen? No, they say, these are all external resources, everything is fine with them, but when they turn into internal, something terrible happens that makes us grow old.

I will not harness for a long time, I will say right away that this hypothesis of limited resources has been repeatedly refuted. What was the best way to test it? Yes, just take animals and start artificially removing long–lived ones from them, in the hope that their fertility will fall - after all, they will need to spend more resources on longevity. Which was done in this work. To the surprise of scientists, those flies that began to live longer began to breed more – and they increased both overall and early fertility. That is, their internal resources were magically added: 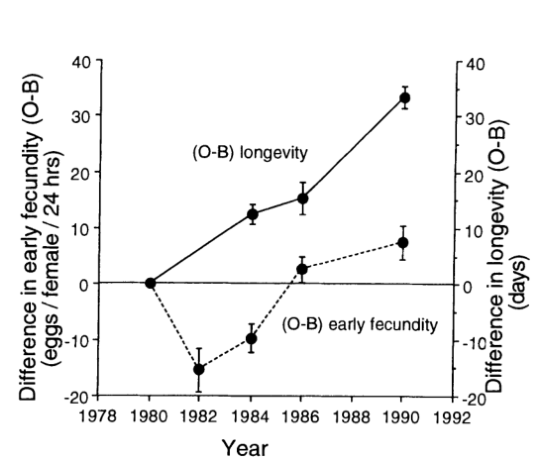 The same thing has been shown in other works on different types of flies. The researchers studied as many as a thousand (!) Mediterranean fruit flies and were also surprised to find that there was no relationship between fertility and longevity.:

An unexpected result in the study was the complete absence of any relationship of early reproduction to either subsequent reproduction or to future life expectancy. This was surprising because, according to Roff (19), conventional life history theory holds that because egg laying is stressful and requires a major expenditure of energy, females that are reproductively active at young ages should be more frail and less fecund at older ages than females that were reproductively less active at young ages. Based on this reasoning, this weakening effect should be manifested as either decreased fecundity at later ages or as increased mortality (i.e., demographic cost of reproduction; see refs. 20–22). 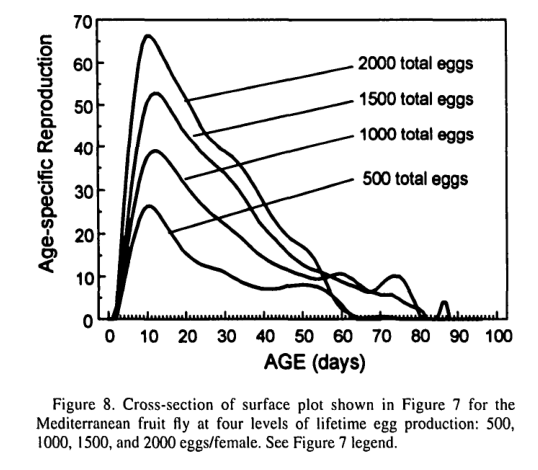 The graph above is just a slice from an even cooler 3D graph from that work, this one: 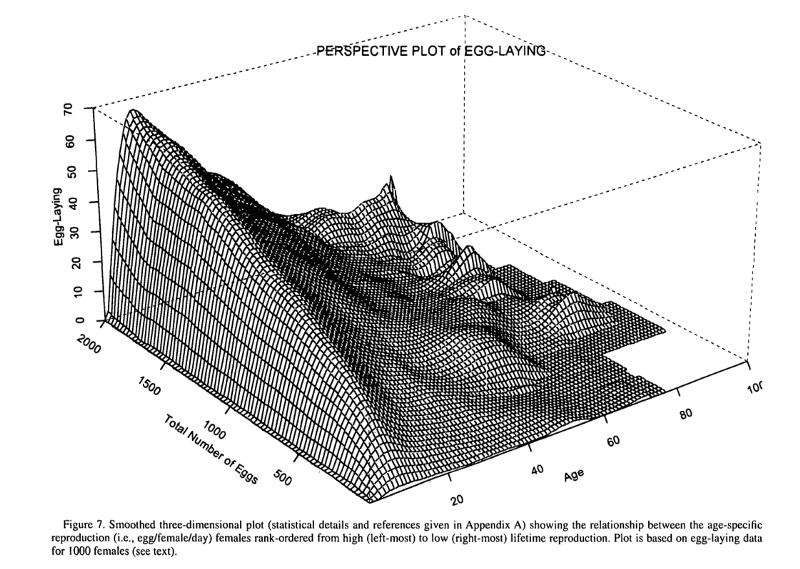 The guys did not stop there and studied the reproduction patterns of 500 more flies, confirming the absence of a trade-off between fertility (early or not early) and life expectancy.:

The only correlation between pancreas and reproduction that they observed was the correlation between the rate of decline in reproduction and aging: the faster the relative (not absolute!) decreases fertility, the earlier the flies die. At the same time, it does not matter when the fly began to breed, sooner or later, and what its average egg laying rate was. The only thing that correlated with the pancreas was the rate of fertility decline. And the researchers themselves say that it looks like a reproduction clock that runs at a certain speed proportional to the rate of aging of the body. Those who age faster lose fertility faster:

In particular, our analysis provides a detailed description of the nature of the linkage between the dynamics of the reproductive trajectory and subsequent mortality. We established the primacy of the rate of reproductive decline over absolute levels of reproduction regarding this link. It is quite amazing that, based solely on knowledge of early reproductive patterns, our approach allows a reasonable prediction of the increase in subsequent death rates at the level of the individual. A possible interpretation of this finding is that the rate of reproductive decline is a good indicator of the speed of ageing of an organism. In this sense, the reproductive clock is synchronized with an individual’s biological age as contrasted to chronological age.

Then one of the aforementioned scientists, James Carey, conducted a study on fruit flies, where he also showed that there is no negative relationship between the pattern of fertility (or absolute fertility) and the pancreas:

To find out which parameters are associated with longevity, we take the most long-lived Drosophila, which are in the 10th cluster of flies. It is surprising that these long-lived flies do not differ from the rest of the population in their reproductive capacity, RC (60.3 ± 5.5 vs 60.47 ± 4.3 eggs/day), or in the length of their maturity stage, T (14.3 ± 3.6 vs 13 ± 4.2 days).… We can see that, indeed, neither RC nor T is related to prolongation of life span in Drosophila.
Only the exponent ?-sen is clearly related to prolonged senescence. The smaller this exponent is, the slower is the decrease in egg-laying after the onset of senescence, and the longer is life span. The maturity period and the reproductive capacity tend to be constant in all clusters. This means that longevity in Drosophila is associated only with the rate of senescence.

Here is a clear demonstration of the fact that the fertility of centenarians is only growing (LS is lifespan, life expectancy). The graph shows the dynamics of egg laying by flies with very different pancreas – from 20 to 60 days, and we see that the longest-lived fly was also the most prolific: 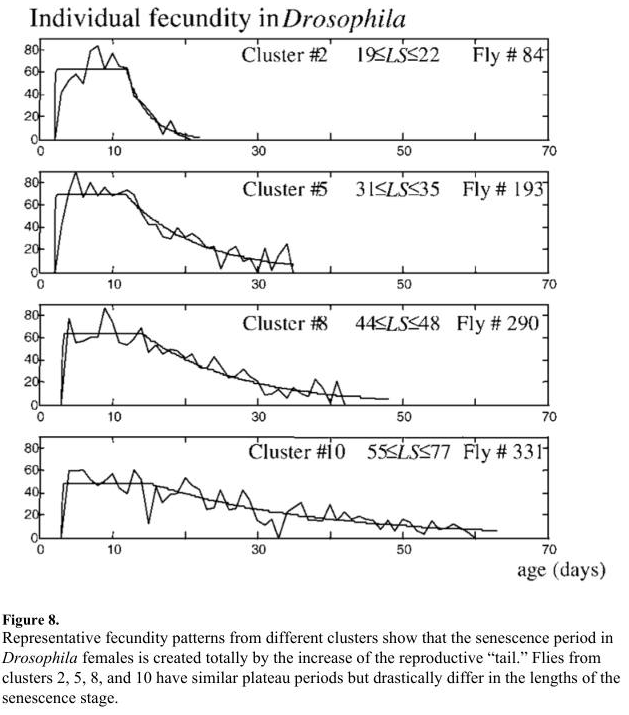 It would seem that everything is clear, but the Lord of the Flies, James Carey, was unstoppable! He got into the taste and also studied Mexican flies and also did not find a connection between fertility and longevity:

[K]nowledge of early egg laying provides no information for predicting either remaining life span or the number of eggs laid during the subsequent one-month period. Thus, at the level of the individual in non-manipulative studies such as the current one, there appears to be no obvious cost of reproduction.

But enough about the flies, let's see what our closer relatives have there. And there is also no visible payment for reproduction. So, the researchers studied 12 species of birds and 18 species of mammals living in zoos, and came to the conclusion that there is no reason to believe that early or general fertility negatively affects life expectancy.

And one of the most obvious examples of the lack of restrictions on resources are social insects – ants, bees, etc. They have queens and live 10-20 times longer than their fellows, and breed like a machine gun.

Speaking of social animals, it is impossible not to recall the naked diggers, in which those lucky ones who manage to achieve the status of procreator live much longer than their less fortunate relatives. Here is a graph of the survival of procreators and "losers" from another social African digger, a Zambian digger: 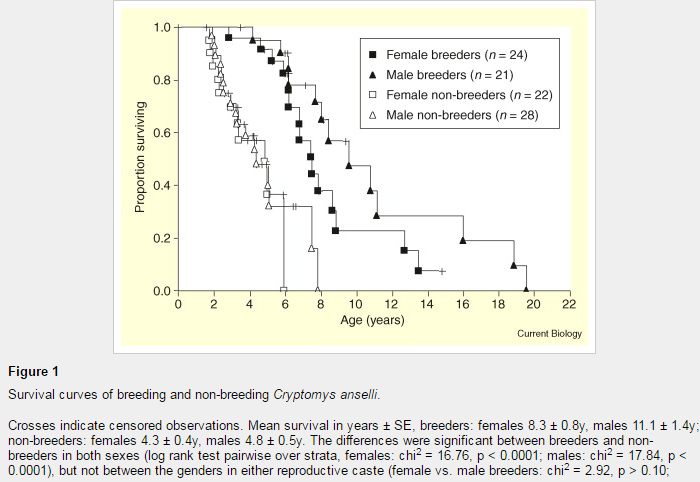 I'm not talking about turtles, whose fertility only increases with age. Or about rabbits: 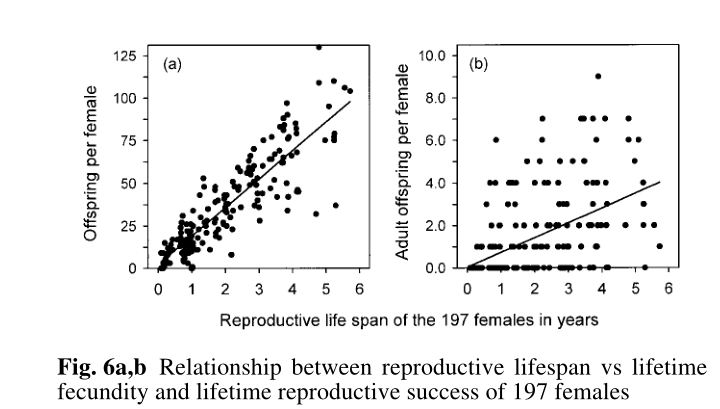 There are other species that are characterized by an increase in fertility with age: 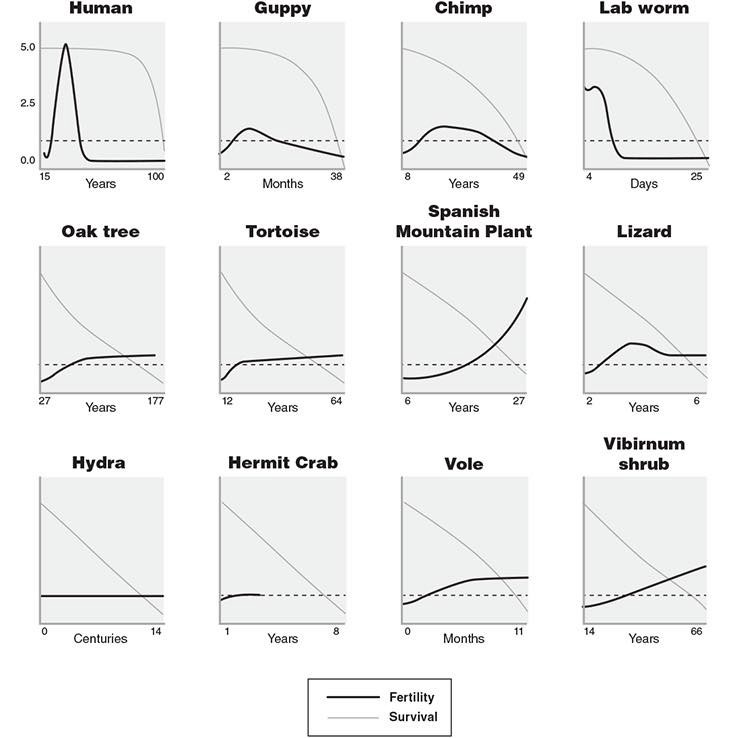 Well, in conclusion, I will say that, fortunately, our beloved women also have no negative effects from childbirth on life expectancy.: