The article by Rodrigo Calado and Neal Young Telomeres in disease is published on the F1000 Reports Medicine website.
Translated by Evgenia Ryabtseva

ResumeThe functioning of telomeres and their restoration are the basic molecular parameters of cells, and violations of their functions lead to the development of various diseases.

This review examines recent advances that have improved understanding of the mechanisms of disease development associated with telomere defects, especially at the molecular level, and clinical manifestations of diseases. The article also discusses the potential role of telomere lengthening in the treatment of diseases, as well as in preventing the start of the aging process or its reversal, about which experts express conflicting opinions.

IntroductionSince the beginning of the 20th century, serious scientific research has been devoted to the study of the end sections of linear chromosomes, which resulted in several Nobel Prizes.

In 1930, Hermann Muller and Barbara McClintock observed that fragmented chromosomes tend to merge with each other, whereas normal chromosomes are stable. Based on this, they came to the conclusion that this is due to the characteristics inherent in the "natural end sections" of chromosomes or "telomeres" (Fig. 1A). Almost 40 years later, Alexey Olovnikov, based on theoretical reasoning, and James Watson, based on the results of experiments on bacteriophages, identified the fundamental problem of semi-conservative DNA replication [1,2]. Since DNA polymerase uses an RNA primer to start DNA synthesis, the space occupied by RNA primers at the end sections of chromosomes is not filled with newly synthesized DNA at each mitosis, which leads to telomere shortening at each division [3]. In the 1980s, Elizabeth Blackburn, John Shostak and Carol Greider found the answer to this fundamental biological riddle by deciphering the structure of telomeres - the terminal elements of DNA consisting of a repeating sequence of nucleotides – and, subsequently, explaining the mechanism of their functioning, which consists in restoring lost telomere fragments in proliferating cells using the enzyme telomerase [4].

Telomeres consist of hexameric nucletid sequences (in human DNA –TTAGGG), repeated hundreds to thousands of times at each end of the chromosome.

Telomeric DNA is covered with a complex of proteins – shelterins (from the English shelter – shelter, protection). Shelterins do not allow DNA damage repair mechanisms to accept the removal of a sequence of nucleotides from telomeres as a break in a double-stranded molecule (Fig. 1B) [5]. Since telomeric sequences do not contain genes, there is no loss of hereditary information when they are shortened.

The telomere length of newly formed leukocytes is enough for about 200 divisions. With normal aging of the animal (as well as in culture), cells divide, which is accompanied by shortening of telomeres (Fig. 1C). 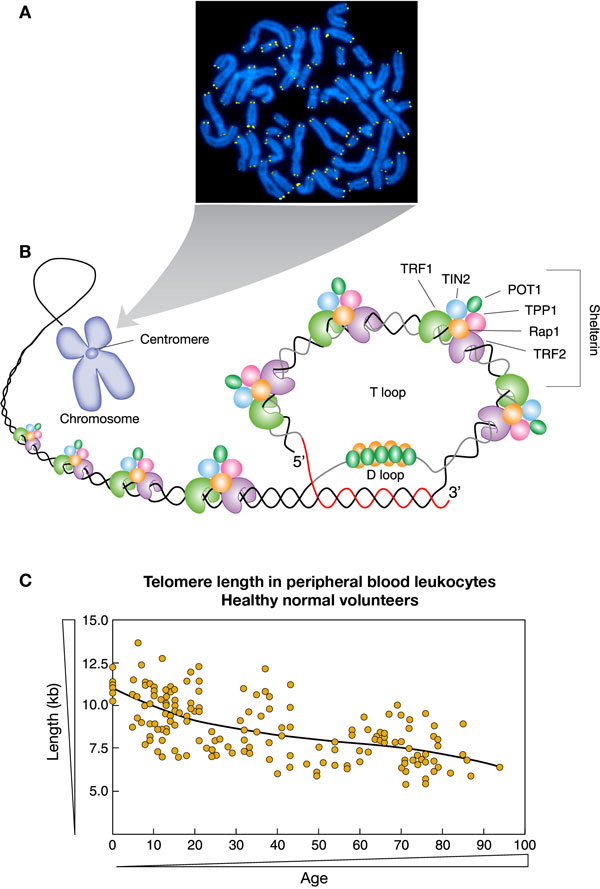 Fig. 1. (A) Telomeres can be visualized using fluorescent in situ hybridization (FISH – fluorescent in situ hybridization, bright yellow signals) on the end sections of chromosomes in metaphase plates (DAPI staining).
(B) A schematic representation of chromosomes and telomeres shows that telomeres consist of thousands of tandem repeating DNA sequences. Protective proteins associated with telomeric DNA are collectively called shelterins or telosomes (represented by TRF1, TRF2, TIN2, POT1, TPP1 and Rap1). These proteins bind to a repeating DNA sequence, covering the nucleotides. In addition, the protruding 3’ fragment at the end of the leading chain is wrapped back and connected to the telomeric sequence, forming a so-called T-loop at the very end of the chromosome.
(C) Age–related change in telomere length (kb - kilobase, thousand nucleotides) of leukocytes of healthy volunteers with normal genotype. Telomeres shorten especially quickly during the first 20 years of life.

When the telomeres reach a critical length, the nucleus signals the cell to stop proliferation, which leads to its entry into the phase of physiological aging or death [6]. Telomere wear explains the existence of the "Hayflick limit" – the number of mitoses that a cell is capable of before division ceases under tissue culture conditions. Therefore, the length of telomeres is a kind of "mitotic clock" – an indicator of the proliferative history of the cell. If cell proliferation continues despite critically short telomeres (usually several hundred hexanucleotide repeats at the end of any of the chromosomes), the end sections of the chromosomes lose their protective function. This can lead to the loss of subtelomeric (located in close proximity to the end sections of chromosomes) genetic information and, more importantly, to recombination between chromosomes, leading the cell to genetic instability, aneuploidy and the acquisition of a malignant phenotype.

Some proliferating cells can extend their telomeres with the help of a telomerase complex [7]. The enzyme telomerase (TERT) is a reverse transcriptase that uses small RNA molecules (TERC) as a template for telomere elongation. As a result, the functioning of telomerase neutralizes the effects of division in certain cell populations, preventing their entry into the phase of physiological aging, cell death and the occurrence of genetic instability. Maintaining telomere length is also possible due to other mechanisms. The alternative mechanism (ALT) is based on chromosome recombination. This mechanism is active in tumor cells, but its components and regulation are poorly understood [8].

Telomere defects lead to the development of various diseases and in recent years scientists have made great progress in understanding the mechanisms of their occurrence at the molecular level.