How will we die

Rating of causes of human mortality

Many people are afraid of dying suddenly: they are afraid that a brick will fall on their head, a car will hit them or a shark will swallow them. In fact, most of us are destined for a more prosaic end. Scientists analyzed the mortality statistics of US residents for 2013 (these are the latest available statistics from the National Center for Disease Control and Prevention) and compiled their own rating of the reasons for people's passing away. 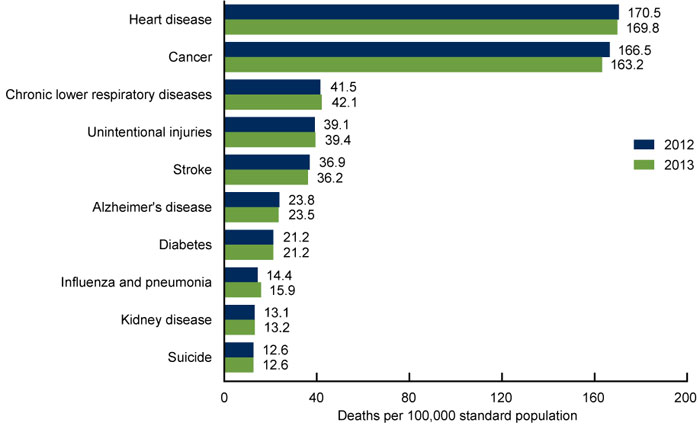 Graph from the graph from the article by Kochanek et al. Mortality in the United States, 2013 (National Center for Health Statistics, 2014) – VM.

10. The tenth place in this sad ranking is suicide, or deliberate deprivation of life: 41 thousand 149 deaths. Suicide is the second leading cause of death among Americans aged 15 to 24 years and 25 to 34 years. Moreover, men become victims of suicide four times more often than women. One of the suicide prevention strategies is the timely recognition of alarming signs, such as frequent conversations about death, substance use, general depression or sleep disorders.

9. Kidney diseases, including nephritis, nephrotic syndrome and nephrosis, are in the ninth place of the rating. They are responsible for the deaths of 47 thousand 112 people in 2013. Nephritis is an inflammation of the kidneys that can be caused by an infection or an allergic reaction to the drug. Nephrotic syndrome is characterized by accumulation of protein in the urine. Among the causes of this condition: infection, reaction to medications, cancer, immune disorders, diabetes mellitus or lupus. Nephrosis is kidney damage that can be caused by painkillers or chronic diseases such as diabetes, lupus, or high blood pressure.

8. Flu and pneumonia killed 56 thousand 979 Americans in 2013. Influenza is a respiratory disease caused by a virus. Elderly people, children and pregnant women are particularly at risk of developing complications associated with it. A seasonal flu shot can help prevent infection. Pneumonia, as a complication of the flu, occurs when viruses or bacteria in the lungs cause infection. At the same time, children under 5 years of age and adults over 65 years of age are at increased risk. Salvation lies in vaccination and hygiene.

7. Diabetes mellitus claimed the lives of 75 thousand 578 American citizens in 2013. A condition characterized by abnormally high blood sugar levels can lead to kidney failure, blindness, heart disease, and even limb amputation. Risk factors include obesity, old age, heredity, and lack of exercise. Regular exercise and maintaining a healthy weight can reduce the risk of developing the disease.

6. Alzheimer's disease is not just memory loss and the most common form of dementia among the elderly. In 2013, she killed 84 thousand 767 residents of the United States. The disease is characterized by problems with memory, thinking and language proficiency, which greatly complicates a person's daily life. Alzheimer's disease usually begins at the age of 60. With increasing age, the risk of developing the disease also increases. The hereditary factor also plays an important role here.

5. Stroke is in fifth place: 128 thousand 978 deaths. A stroke occurs when blood flow to a certain part of the brain is disrupted, which leads to cell death, or when a blood vessel of the brain bursts. Stroke can lead to speech difficulties, paralysis and death. Risk factors include high blood pressure, high cholesterol, heart disease, diabetes, being overweight or obese, excessive alcohol consumption and smoking. In general, the risk of stroke in men is higher than in women. A healthy diet, exercise and a normal weight reduce the likelihood of developing the disease.

4. Accidents or deaths from related injuries are 130 thousand 557 deaths in the USA in 2013 and the fourth place in the ranking. The main killers in this category were road accidents that caused the death of 33 thousand 804 people. As well as falls from a height – 30 thousand 208 deaths and accidental poisoning – 38 thousand 851 deaths. Accidents are typical for all age groups, there is no distinction between the elderly and the young, but there is still one feature: the victims of accidents are most often people aged from one year to 44 years.

3. The top three are closed by chronic diseases of the lower respiratory tract. They are responsible for the deaths of 149,205 Americans in 2013. The main killer is chronic obstructive pulmonary disease (COPD), which includes chronic bronchitis and emphysema. Chronic bronchitis, characterized by swollen and narrowed airways, can cause the development of emphysema, destruction of the alveoli and lung damage. Smoking is the main cause of chronic obstructive pulmonary disease. Smoking men are 12 times more likely to die from COPD than non-smokers, so giving up this addiction can reduce the risk of developing this disease.

2. In the second place of the rating is cancer, which caused the death of 584,881 people in 2013. There are many different types of cancer, but they are all associated with uncontrolled cell growth. If men are most susceptible to prostate, lung and colon cancer, then women are more likely to have breast, lung and colon cancer. In general, lung cancer leads among both men and women. Hereditary factors, an incorrect lifestyle can contribute to the development of the disease. Conversely, quitting bad habits, particularly smoking, can reduce the risk of developing several types of cancer, including lung and kidney cancer. There is also medical evidence that a diet rich in fruits and vegetables that do not contain starch can reduce the likelihood of developing esophageal and stomach cancer. Obesity can lead to the development of several types of cancer, including colon and uterine cancer.

1. Heart diseases became the leader of the rating, ahead of terrible oncological diseases and tragic incidents. Killer number one claimed the lives of 611 thousand 105 US residents in 2013. This is about a quarter of all deaths in the country. The most common types of heart disease are coronary artery disease and cardiac arrhythmia. Risk factors include obesity, smoking, high blood pressure, diabetes, and high cholesterol. Accordingly, monitoring cholesterol and blood pressure levels will help reduce the likelihood of developing heart disease.