"Happiness is there!"
The happiness index in Russia has reached a historic high in 25 yearsThe All–Russian Center for the Study of Public Opinion (VTsIOM) presents data on how many Russians feel happy and how many feel unhappy, why they think so, and who is more around – happy or unhappy.

The happiness index shows how happy Russians feel. The index is based on the question: "There are all sorts of good things in life. But speaking generally, are you happy or not?". It is calculated as the difference between the sum of positive answers ("definitely yes", "probably yes") and negative answers ("probably not", "definitely not"). The index is measured in points and can range from -100 to 100. The higher the index value, the happier Russians feel.

Russians began to feel happier: the happiness index over the past year has added 5 points and reached a 25-year high (64 points). Three quarters of Russians (78%) feel happy today, and such a high value of this indicator has been maintained over the past two years (77% in 2012 and 2013). Young people aged 18 to 24 (92%), respondents with higher education (83%). In turn, 14% of respondents said that they do not feel happy.

The feeling of happiness for every third person (30%) is associated with well-being in the family. Also, those who feel happy find joy in their children and grandchildren (17%). In addition, an important factor of happiness, according to respondents, is the presence of interesting studies or work (13%). Another 12% of the survey participants are happy because everything has been successful in life. Over the year, the share of those for whom the main reason for happiness is health – their own and loved ones (from 6% in 2013 to 11% in 2014) has increased. There are twice as many people who explain the state of happiness by simply being happy to live (respectively, from 3% to 7%). Also, happiness brings love (4%), opportunities for self-realization (4%), material well-being (4%), the presence of a "roof over your head" (4%). Happiness is to live in peacetime – 4% of respondents believe. And another 4% of respondents simply do not see any reason to be sad.

Those who consider themselves unhappy complain, first of all, about the low level of income (15%). Also, respondents do not feel happy because of old age and illness (8%), lack of a good job (4%), generally difficult life circumstances (4%), etc.

According to the relative majority of Russians (45%), they are mostly surrounded by happy people (for comparison, a year ago there were 42% of them). Happy people are more likely to surround 18-24-year-olds (63%) than respondents over 60 (34%). Unhappy people predominate among acquaintances of 12% of respondents. And 38% of our fellow citizens are surrounded by approximately an equal number of happy and unhappy.

The initiative All-Russian VTSIOM survey was conducted on April 19-20, 2014. 1,600 people were interviewed in 130 localities in 42 regions, territories and republics of Russia. The statistical error does not exceed 3.4%. 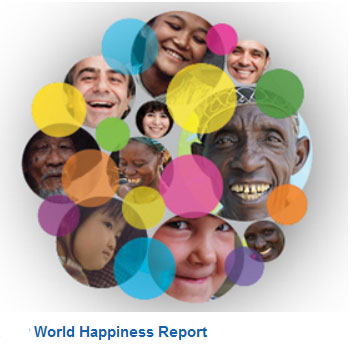 According to data obtained in 2012 by the British non-governmental organization New Economics Foundation, Russia took the 122nd place in the ranking of 151 countries according to the "happiness index", losing not only to the Baltic states, but also to Kazakhstan. The world average index calculated according to their methodology was 63.4%, the Russian average was 34.5%. It is impossible to directly compare these indicators with the figures obtained by VTSIOM, because both methods are different, and happiness according to the results of surveys is estimated in different units, but statistics are like a drawbar…
A year later, according to the World Happiness Report prepared by American researchers commissioned by the UN, Russia was ranked 68th in the ranking of happiness levels from 150 countries of the world, behind Angola, Albania and Belarus. Either a lot of happiness fell on Russia from nowhere, or again the discrepancy is explained by different methods of surveys and calculations.
And who do you want to believe – foreign spiteful critics or pink and fluffy VTSIOM, who had 77% of Russians bursting with happiness in the past and the year before last, and now another 1% has been added to them (with a statistical error of 3.4%)?
If you are interested in tables detailing the annual increase in Russian happiness in general and on individual points, read the full version of the report on the VTsIOM website.