Not getting enough sleep? Get into physical education!

Australian scientists have found out that those who suffer from lack of sleep or poor-quality sleep and do not move much are at the greatest risk of dying from cardiovascular diseases, stroke and cancer. However, if such people become physically active, they can significantly reduce the risk of premature death.

The work was published in the British Journal of Sports Medicine (Huang et al., Sleep and physical activity in relation to all-cause, cardiovascular disease and cancer mortality risk).

In their study, scientists from the University of Sydney (Australia) used UK Biobank data, which were collected over 11 years, for 380,055 people.

The participants were divided into groups according to three levels of physical load: high, medium and low. Scientists also assessed the quality of their daily sleep on a five-point scale. It turned out that the greatest risk of death from cancer or cardiovascular diseases (CVD) were those who chronically lacked sleep and did not comply with the WHO norm for daily physical activity. 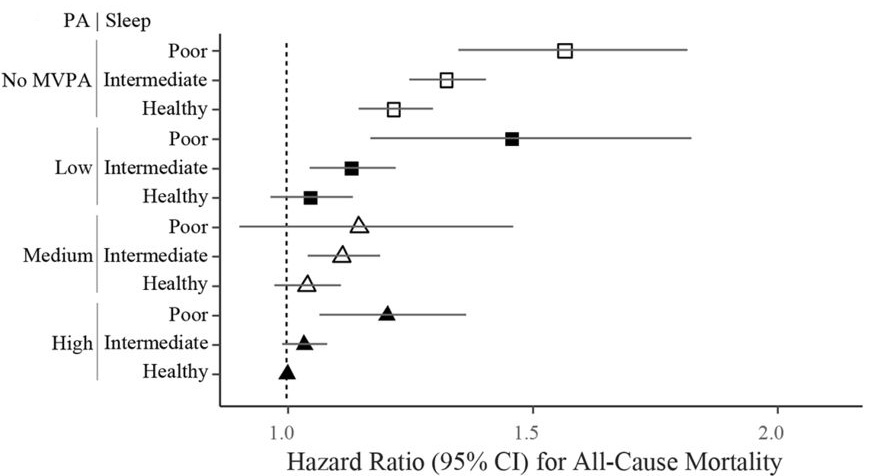 But for those who also had poor sleep quality, but trained daily, the risk of death from the above causes decreased markedly and was even reduced to the indicators of people who slept well and did physical education.

In general, the risk of death from cancer pathology and CVD in those who had poor sleep quality and were not fond of sports was 45 percent higher than in people who rested at night and had an optimal level of exercise.

Therefore, the authors concluded that WHO recommendations on the amount of daily exercise can offset poor sleep quality. Nevertheless, they emphasize that further research is needed for final conclusions.