Science is sinking. The President is sitting on the shore

This open letter from the head of the RAS Workers' Union was sent on November 12 in the form of a comment on the topic: "Science, Technology, Innovation" on the President's personal blog Of the Russian Federation:

The Russian scientific community is seriously concerned about the latest initiatives of the Russian authorities in the field of science. The opinion of scientists does not reach the authorities or is ignored. At the same time, the authorities pay special attention (strictly according to Saltykov-Shchedrin) to proposals from abroad. However, not everyone ... The leaders of the world economy, taking advantage of the crisis, radically increased funding for science – the locomotive of the innovative economy, and our government went to an unprecedented "experiment": in order to achieve innovative breakthroughs, it reduced funding for basic research by 3 billion rubles. The total budget of the Russian Academy of Sciences will decrease in 2010 by 6.5 billion rubles (or 11.8%) compared to 2009. Although already in the 2009 budget there was almost no money for research at the Russian Academy of Sciences – everything went to a salary, by no means excessive.

The Ministry of Education and Science is not able to solve the issues of financing science – an obvious fact and confirmed by the mouth of the Minister A. Fursenko himself. In general, his speech on November 2 and the briefing on November 6 are striking with unprofessionalism and incompetence! Even more surprising is the public reaction of the authorities to the recent proposal of 150 foreign scientists, our former compatriots. Proposals to the President's address are already being prepared based on the letter. Why is the opinion of the domestic expert community not taken into account? Foreign specialists are going to be invited to decent salaries, while no one promises greenhouse conditions to domestic personnel. How will the scientific collectives separated in this way coexist and cooperate? Of course, we are for mobility and the opportunity to work in any country. So, in connection with the prolonged crisis of our economy, which has reliably straddled the pipe, it is possible to invite professional managers from abroad to strengthen the government.

I suggest you consider the proposals signed by more than 12,000 employees of the Russian Academy of Sciences – dozens of academicians, hundreds of doctors, thousands of candidates of sciences. According to our information, this letter did not reach the addressee: it was forwarded by the apparatus for preparing the next unsubscription to the Ministry of Education and Science, which the scientific community does not trust. 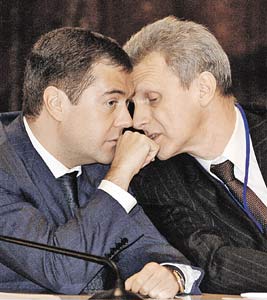 Only Yevgeny Kovalev from Latvia, the inventor of the current (!), answered this message to the president. antigraviletov and the discoverer of many other things unknown to modern science. And also the closure of the known – in particular, neutrinos and quarks.
In this sort of spirit:
"... My opinion – why are you so fussed? Academicians from the Academy of Sciences gave themselves titles, many of which did not make any Discoveries in Science. And they think that the state should pay them money for titles further. In the modern world, money is paid for specific cases and projects, not for titles. And then some people don't have enough money for worthwhile projects, like me – to create anti-gravity vests that can fly in all environments. And they ask the state for money to sit in the Academy of Sciences. And who has more truth? Others are looking for 50 years of neutrinos, and they can't find it because it's not there, giving it the fantastic property of penetrating through the stars, go check it out! Still others create mathematical particles by discovering quarks of charm and charm, which also do not exist in the atomic nucleus. And they also manage to get Nobel Prizes in physics for their research. The state needs real Discoveries and inventions, not your fantasies. It is right that the Academy of Sciences was deprived of part of its funding. This is called modernization in Science and regulation of financial flows..."

The President, obviously, is still thinking what to answer to the trade union of the Academy of Sciences.
Or he thinks about something else - his head swells without science.
The Minister of Education and Science is also silent.
Maybe he teaches higher mathematics?