American scientists have proposed a new way to compare DNA sequences of groups of individuals, which does not need a reference genome. The method showed that representatives of African tribes have DNA fragments characteristic of Homo neanderthalensis, although they were not found there before. It is likely that some Homo sapiens who exchanged genes with Neanderthals migrated to Africa at some point, and that the common ancestor of all representatives of our species interbred with Neanderthals. Article by Chen et al. Identifying and Interpreting Apparent Neanderthal Ancestry in African Individuals is published in Cell.

When in 2010 the draft version of the Neanderthal genome was compared with the genome of modern humans, it turned out that all populations Homo sapiens outside Africa, two to four percent of the DNA is inherited from Neanderthals. However, traces of this species have not been found in the genomes of indigenous Africans.

One of the reasons could be the way this comparison was made. The methods that have been used before involve the use of reference DNA samples of Homo sapiens, which belong to several representatives of the Yoruba people. It is believed that they have not had contact with other human populations for a long time, which means that they do not have Neanderthal genes.

But most statistical methods of genome comparison are designed in such a way that they are unable to detect Neanderthal DNA sequences in the genome under study, if there are exactly the same ones in the reference. That is, if you look for Neanderthal genes from those who received them from the Yoruba (or from the same source as the Yoruba), you will not be able to identify them, even if they are available. 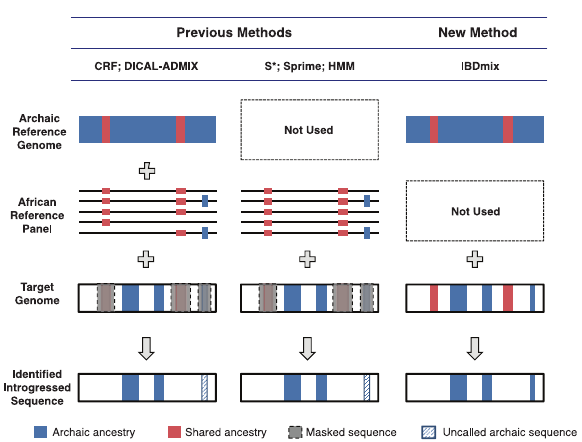 Schematics of the old genome comparison methods and the new IBDmix method. Red marks the DNA sections that Neanderthals (Archaic genome) and modern humans (African reference panel, Target genome) inherited from a common ancestor, blue — DNA fragments that modern humans received from Neanderthals, gray — fragments that could not be identified using existing methods. Drawings from an article in Cell.

Therefore , geneticists from Princeton University, led by Joshua M. Akey, has developed a new way to analyze DNA sequences of members of the genus Homo, which does not require the presence of a reference genome of modern humans and allows you to directly compare the genome of one Neanderthal and the required group of people. It was named IBDmix — from identity by descent, the assumption that identical DNA sequences are inherited from a common ancestor.


The main material for testing the method was the genome of a Neanderthal from Altai. The Denisovan genome acted as a negative control: it made it possible to identify DNA sites common to all Homo. DNA sequences of 2504 modern—type people — of various nationalities - were taken from the 1000 Genomes project.

IBDmix made it possible to identify not only the presence of Neanderthal DNA in all populations, including African (there it turned out to be about 0.3 percent, that is, 17 million base pairs, and it coincided 94 percent with the Neanderthal DNA of non-Africans), but also to determine how it got into the genome of a specific group of modern humans. Most likely, the gene flow was bidirectional. Our species not only received DNA sequences from Neanderthals, but also transferred some parts of its genome to them.

There are two scenarios according to which the described mixing of genes of the two species could occur, and they complement each other. Firstly, probably about 200,000 years ago, even before the division into European and Asian populations, homo sapiens interbred with Neanderthals, and it was then that the most extensive gene exchange took place. Secondly, later Neanderthals could interbreed with European sapiens, and those, returning to Africa, passed on to the locals, including the genes of another species.

The authors of the article warn that for new works it may be necessary to reconfigure IBDmix. The version of the algorithm that they themselves used is sharpened to search for DNA sequences characteristic of Homo neanderthalensis from Altai in people of the modern type, and there were, of course, much more than one different lineages in this form, and they lived in different parts of the continent and did not meet with different Homo sapiens synchronously.

New data on the time and frequency of gene exchange between a Neanderthal and a reasonable person appear with enviable constancy. So, in 2016 it turned out that it happened about 100,000 years ago, not 65,000. And the work of 2018 showed that the crossing of the two species occurred at least twice with a difference of several thousand years.