The secret of cell rejuvenation has been discovered

Human cells have a limited lifespan: they can divide a certain number of times, after which they die. However, these "settings" are reset during the formation of germ cells, so the child of an 80-year-old man can live as long as the child of a 20-year-old father.

How this mechanism is regulated in the human body is unknown, but biologists at the Massachusetts Institute of Technology, working under the guidance of Professor Angelika Amon, have identified a gene that controls this process in yeast. 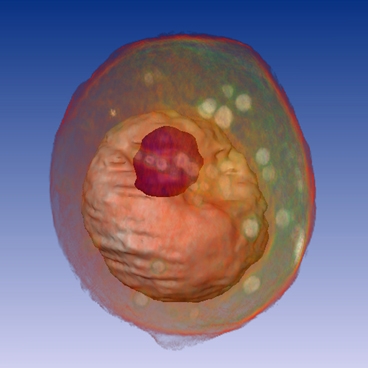 Image of a yeast cell (Saccharomyces cerevisiae),
obtained by X-ray microscopy.
Inside the cell, a nucleolus and a large vacuole (red) are visible.

Experts have long learned to distinguish aging yeast cells from young cells. (Usually the life cycle of a yeast cell consists of about 30 divisions.) The aging-associated changes in yeast cells include the accumulation of DNA fragments and aggregates of cellular proteins, as well as the abnormal structure of the nucleolus (an accumulation of proteins and DNA located inside the cell nucleus and providing synthesis of all cellular proteins). However, until now, no one knew which of these physical signs are important components of the aging process.

Reproduction of yeast cells consists in their entry into a special type of cell division – meiosis, which results in the appearance of spores. The researchers found that the signs of cellular aging disappear at the final stage of meiosis. They also found out that simultaneously with this act of "rejuvenation", the NDT80 gene is activated.

The subsequent blocking of the activity of this gene in aging cells that had lost the ability to reproduce doubled their life expectancy. However, activation of the NDT80 gene eliminated only one type of cellular damage – abnormal nucleolar structure, which indicates an important role of this phenomenon in cell aging.

The protein product of the NDT80 gene is a transcription factor, that is, its function is to activate other genes. Currently, researchers are searching for targets of this protein, which, apparently, trigger the rejuvenation process. They also plan to study the effect of activation of the NDT80 gene on Caenorhabditis elegans worms and an analogue of this gene, the p63 gene, on mice.

The human genome also contains the p63 gene, which is a close relative of the p53 tumor suppressor gene, whose high activity is characteristic of cells that give rise to sperm and eggs.

According to Professor Amon, if a signaling pathway similar to the one that works in yeast cells is involved in the formation of human germ cells, it can be used to rejuvenate human cells or create pluripotent stem cells suitable for use in cell therapy.

Perhaps someday the identification of genes capable of reversing the aging process will allow us to develop methods to stimulate their expression in ordinary somatic (non-sexual) cells.

The article by Elcin Unal et al. "Gametogenesis Eliminates Age-Induced Cellular Damage and Resets Life Span in Yeast" was published on June 24 in the journal Science.